Michelle Bachelet Executive Director of UNIFEM and Abdou Diouf, Secretary-General of OIF, have signed a cooperation agreement between UN Women and Organisation Internationale de la Francophonie to enhance women's empowerment in the fifty-six states of the French-Speaking community. 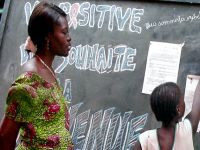 Michelle Bachelet, Under-Secretary-General and Executive Director of UN Women - the United Nations Entity for Gender Equality and the Empowerment of Women - with the Secretary-General of Organisation Internationale de La Francophonie(OIF), Abdou Diouf, signed a framework cooperation agreement today aimed at mutually reinforcing the various initiatives and projects to promote women's rights in Francophone countries - especially with regard to the fight to end gender-based violence (GBV).

When signing this Framework agreement, Abdou Diouf, Secretary-General of the OIF, expressed great pleasure at the possibilities offered as a result of such collaboration: "As part of our overall duty to express solidarity, we need to explore ways and means of giving impetus to and strengthening relations between la Francophonie and such a key player as UN Women". Michelle Bachelet, Under-Secretary-General and Executive Director of UN Women, said: "Women's participation is a crucial element of democracy, peace, and sustainable development. We are delighted to be working together with the OIF in order to bring about real change in the lives of women and young girls".

The cooperation agreement places special emphasis on the following areas: the fight to end gender-based violence; women's participation in political and decision-making processes; advocating for gender equality; and inclusion of the gender equality issues as part of sustainable development.

UN Women is the UN organization dedicated to gender equality and the empowerment of women. A global champion for women and girls, UN Women was established to accelerate progress on meeting their needs worldwide. UN Women supports UN Member States as they set global standards for achieving gender equality, and works with governments and civil society to design laws, policies, programmes and services needed to implement these standards.

In March 2010, when reviewing and assessing fifteen years' implementation of the Beijing Platform for Action, the OIF's Member States and Member Governments adopted the "Francophone Declaration on gender-based violence", which clearly laid out the principles behind the fight to end all forms of violence against women and young girls - be it in the private or public spheres - and which also put forward a broader definition of gender-based violence, recommendations for the OIF and clear commitments to be undertaken at the national level.

One of the scourges taking place in some French-speaking African countries is Female Genital Mutilation:

Female Genital Mutilation has been responsible, at worst, for many deaths through haemorrhage and infection and at best, causes great pain after the operation and at childbirth and can even interfere in the normal birth of babies, putting at risk the lives of the mothers and children. A law of 2001 in Kenya, called the Law of Minors, prohibits the practice of traditional rites which cause physical or psychological harm to the minors. Breaking this law carries a punishment of up to a year in prison and a fine of 66 Euros.

136,000,000 women have been submitted to this horrendous act of butchery, 66% of which are expected to suffer the consequences in future. 50% of all African women have to undergo FGM, a figure which reaches 98% in Somalia and parts of Egypt.

Many parents in Africa take advantage of the school holidays to submit their daughters to this barbaric practice which goes against any norms of basic human rights.