And I say why not? 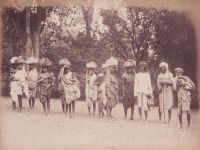 For decades now, we have been witnessing atrocities perpetrated on the hapless inhabitants of India's very deep hinterlands where very precious ore has been discovered by mining companies that have their tentacles spread along the spectrum of the global forestlands. The atrocities have taken place when the original inhabitants of the forest land, who we call tribals have revolted with all they can to stop them being displaced to an unknown far off land that gives them nothing to sustain on and are asked to march on with little or no compensation on hand.

Imagine a whole group of them, men, women, children, the sick and the elderly, their pets, their cattles, their poultry are forced to move away, away to a distant land that is not even seen on the horizon. It is that far for them while the mining companies with the help of the government machinery, including armed police, make a beeline to their areas to make camps. And the plunder begins.

The local flora and fauna are destroyed, trees burnt down or cut down without mercy.  The local waterways poisoned by the chemical silt that is the by-product of the mining process. And the mining companies thrive while the government gets a pittance as royalty, the major amount earned takes an overseas flight.

Of course this would remind one of the traumatic, bloody marches the Native Americans had to endure at the onset of colonisation of their lands on the East Coast. The Apache Trail goes on for many hundreds of miles that saw millions of them perish during their forced push to look for a new homeland in the deserts of the Southwest. Meanwhile colonisers set up their tents and built cities and plantations that once were in the possession of these Natives.

Almost a similar drama has taken place in the hinterlands of India. Whom do you think are the migrants to urban areas who come in search of a livelihood for their families and create slums, for there is no option for them. It is these displaced, landless peasants and forest dwellers who are forced into accepting the urban chaos, not of their choice whatsoever!.

This has been happening for a few decades now. During the colonial era, the British thugs passed a law that said the forest land belongs to them and automatically the produce from the forests are theirs. Of course, the tribals revolted but in turn got the brunt end of the brutal force on their faces and bodies. After 1947, the same old colonial law was re-legislated once again with the same results. Many of the tribals took arms to defend their ancestral homeland, some didn't, they believed in pacifism.

A hypothetical question at this moment: suppose vast hordes of very very precious rocks, ores  are found in urban areas which are densely populated by the urban rich, the elites, the middle class and the poor in their shanty towns and a company like Vedanta who is wholeheartedly supported by the Home Minister, for this company made him super rich when he represented them as their corporate lawyer, decides to start their mining operations in middle of a bustling city like Mumbai or Rio, will the governments adopt the same tactic they used on the hapless tribals?

Will they have *alls to ask the super-rich Ambanis, or Pedros or Tatas etc etc etc to gather their belongings and move away to a distant land, with little or no compensatio?. Suppose this happens in all the urban centres, finding of precious ores and crystalline rocks instead of in deep forests?. Will the half-twitted urbanites who know nothing about the travails of the rural, forest poor, heed to the call of the mining mafias to move away without a fight or opposition?

Or will they raise a hue and cry in the mass media shouting 'murder' at the top their shrill or hoarse voices at their sudden impending displacement? Nice wicked scenario to think of.

The same trauma is being felt by the forest dwellers, landless peasants in the hinterlands my dear urban citizens. Now do you understand what losing a home means, especially if it is an ancestral one, one that has been continuously inhabited by many generations who have seen the pristine forests grow, rivers flow with pure drinkable water for eons till these villains set in their foot on their holy soil.

Now really if this urban discovery were to take place, there is every possibility that there are precious ores sitting right under your magnificent bungalow or the skyscraper of a Mukesh Ambani, what really will be the consequences. Suppose these tenants, I call them tenants since they are not the original inhabitants of these areas, unlike the forest dwellers who are, refuse to budge an inch and are not satisfied with the compensation, will the Home Minister take up guns from under his Dhoti and threaten them, that Operation Green Hunt will take an urban avatar and track them down,

Ha ha I would like to see this happen really! The urban elite and the not-so-elite feeling the brunt, the trauma of the rural and the forest folks.

But no this ain't going to happen, it is just wishful thinking. A wishful thinking or a fantasy to see the urban elite feel a little of the pinch of suffering the folks from the hinterlands of India's Dantewada region or Amazonian belt, because it is the same. There too the tribals who have dwelled for eons in the depths of the Amazon have been forced out of their ancestral dwellings and made to scavenge for a bit of distant land to survive.

The same story, almost a reflection, has happened in Australia with the Aborigines pushed into a no-man's land to survive or die.

So whether it be the reason to launch a new mining operation in a deep dense forest, or to promote timber industry encroachment on the forest land, or to push them into extinction to build new colonies for new settlers, at the receiving end of it are the tribal folk, uprooted from their traditional lands and their traditions and forced to accept a culture that was never theirs.

What may be the solutions to the travails of these almost hapless voiceless folks? What is lost is lost as in the case of American Natives or the Aborigines of Australia. But there is time enough even now to halt the marauding forces of the mining and timber mafia that is active in the hinterlands of India and the Amazonian regions.

And I hope some very precious ore or raw gemstones are found and mined in urban centres, thereby dismantling decadence that has set in urban areas.  Let the urban elites march to set up homes among treetops, cultivate crops and teach children simplicity of life. This is exactly, my friends, what many of the tribals doing. Living simply!