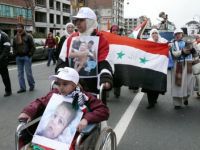 "There is a special place in hell for women who don't help other women." (Madeleine Albright, 1937 - )

As the anniversary of probably one of the most infamous responses in broadcasting history approaches, the woman who uttered it is shortly to be awarded "the highest honour" that America bestows upon civilians: the Presidential Medal of Freedom.

Madeleine Albright, Iraq's "Grim Reaper," of course confirmed on "Sixty Minutes" (12th May 1996) that the deaths of half a million children as a result of the absolute, all-embracing deprivations of the UN embargo were, "A hard choice, but the price, we think the price is worth it."

Her comment also further endorsed the extent to which the United Nations had soiled its own founding affirmation to, "Save succeeding generations from the scourge of war .." by declaring a new method of warfare, the withdrawal and denial of all life-sustaining necessities. Albright, at the time of her astonishing statement was US Ambassador the UN (1993-1997).

Ironically, as a child, she and her Czechoslovak family, her father a diplomat, lived in London during the 1939-1945 war, and whilst there she appeared in a film on the plight of children in war.

In her autobiography, she describes how her experience and knowledge of the horrors and repercussions of war were also shaped by the terrible consequences for a small state when it collides with the ambitions of interests of a big one. Iraq's twenty-five million population and America's three hundred and fifty million again come to mind.

She enjoined in further heaping misery on Iraq's most vulnerable as US Secretary of State (1997-2001).  Perhaps, as many, for good or ill, she was shaped by her childhood. When her family returned to Prague after the war, controversy was caused by their being given a home owned by a wealthy German family. Germans were expelled from the country by Prime Ministerial decree after the war.

At least it was only a house. The government she had served went on to take over - and comprehensively ruin, plunder and further impoverish - two countries and their peoples.

For the annals of, "You Could Not Make It Up," Ms. Albright's current positions include being Co-Chair of the United Nations Development Programme's Commission for Legal Empowerment of the poor, which "works to make real improvements in people's lives (fostering) economic growth, poverty reduction, human development and making the "law work for everyone."

In September 2006, she received Menschen in Europe Award for furthering the cause of international understanding.  Orwell strikes again.

On the 26th of April, announcing the thirteen recipients of the 2012 Presidential Medal of Freedom Award, President Obama commended Madeleine Albright for her efforts to bring peace to the Middle East .... reduce the spread of nuclear weapons, and for her role as a longtime champion of democracy and human rights all over the world. (i)

"These extraordinary honorees (have) challenged us ... inspired us, and they've made the world a better place," said the President.  The Medal honours those who have significantly contributed to world peace.

Reading this "Adventures of a Heroine" fantasy story, the memories of the Iraqi mothers I have held, their tears mingling with mine, or dampening my shoulder as they watched helplessly as their children faded away in front of us for want of medications, denied by Albright's country and the UN she served, flooded back.

The funerals, with the litany of coffins, so small, the impossibly little grave sites beyond counting, throughout Iraq, are witness to unique wickedness.

But Madam Albright is right on one thing. There is indeed "a special place in hell for women who don't help other women." Her award may yet haunt her to become the ultimate poisoned chalice. Here's hoping.