Truth and lies about Chernobyl disaster

On April 26th, as Russia and Ukraine marked the 26th anniversary of the Chernobyl nuclear disaster, specialists begin the construction of the new sarcophagus above the 4th power unit of the station. The new sarcophagus will isolate the destroyed reactor from the environment in 2015. 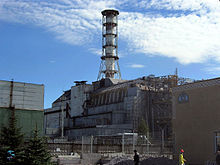 Ukraine is working on the 1.5-billion-euro project in cooperation with the international community. The builders of the new sarcophagus say that the new cover would not be a solution to the problem. Radioactive elements will decompose in hundreds of years.

"We remember those people who died as a result of the largest man-made disaster of the 20th century. They left this world protecting mankind from the Chernobyl disaster. They will stay in our memory for good. The pain of Chernobyl still echoes. That is why still care about the safety of the cover above the ruined power unit. Ukraine feels the support from the majority of countries of the world in this problem," a message posted on the website of Ukrainian President Viktor Yanukovych wrote.

The radioactive cloud covered Ukraine, Belarus, Western regions of Russia, as well as Eastern and Northern Europe. As many as 600,000 people were recognized as liquidators of the disaster. More than 30 of them died during the first three months after the explosion. In total, Chernobyl has killed from 25 to 100 thousand people in 25 years since the catastrophe.

More than 115,000 people were evacuated from the territory of about 30 kilometers around the nuclear power plant. The Shelter sarcophagus was built above the ruined reactor at the end of 1986. However, the power plant was in operation, albeit partially, right until 2000.

Ukraine signed the agreement about the construction of the cover above the 4th reactor with several foreign countries in 2007. The works to build the new sarcophagus started only in three years. The construction o the sarcophagus is to end by 2015, Le Monde said.

The price of the project has grown from the original amount of 930 million to 1.54 billion euros. The lion's share of the amount will be assigned by European countries, the newspaper wrote.

Most of all, specialists are concerned about the possibility of the fire, Le Monde wrote. The new dome will be able to withstand temperatures up to 700 degrees Centigrade. However, a fire may raise the temperature in a confined space to 1,200 degrees. Many experts say, though, that such temperatures will hardly be reached underneath the spacious dome.

Another problem, which engineers had to deal with was connected with the assembly of the dome only 300 meters from the reactor. To create acceptable conditions for work, the company in charge of the construction decontaminated nine hectares of land, having covered the territory with 30 centimeters of concrete. As a result, more than a thousand people will be able to work on the construction site without any special protective gear.

There will be a 110-meter crane installed underneath the dome. The crane will be able to move the cargoes of up to 50 tons. The crane is currently being built in the USA. It will be delivered to Ukraine at the end of 2013. Afterwards, specialists will build a platform above the dome from which they will be controlling the work of the robots. The robots will destroy the old sarcophagus to extract the contaminated materials. This is a responsibility of the Ukrainian side, though, foreign participants of the project said.

Specialists still argue about the consequences of the Chernobyl tragedy. Some experts continue to dwell on the terrifying scale of the disaster. Others say that the real state of affairs is not that horrible. Rafael Arutunyan, a professor, first deputy director of the institute for safe development of nuclear power believes that many "facts about Chernobyl" are nothing but myths.

Myth No.1: The Chernobyl disaster showed a catastrophic influence on the health of hundreds of thousands of people.

"The Russian medical and dosimetric register provided the data on more than 500,000 people. The register showed the only serious consequence of the disaster - thyroid cancer among children. The disease developed due to the insufficient consumption of iodine and the restriction on the consumption of local foodstuffs. From 400 incidents of thyroid cancer, 200 of them are related to the consequences of the Chernobyl disaster. There was one lethal outcome among them," Arutunyan told RIA Novosti.

From 2.8 million Russians, who found themselves in the disaster-stricken area, 2.5 million of them received the additional dose of radiation less than 10 millisievert, which was five times less than the average radiation background.

"Less than 2,000 people received the doses of more than 100 millisievert, which was 1.5 times less than the average dose received by the citizens of Finland," the professor said.

Myth No. 2: The genetic consequences for mankind and the natural world are terrifying.

"World science has never observed any radiation-caused genetic consequences on people in 60 years of scientific research," the expert said.

There was no irreparable damage caused to the environment either, the professor believes. "The paradigm of radioecology is as follows. If humans are protected, then the environment is protected at a much greater extent. Speaking of Chernobyl, the influence on nature was observed only near the ruined reactor, where the radiation of trees in the so-called "red forest" was measured up to 2,000 Roentgens. At present moment, the natural environment even in that location has recovered completely," he said.

Myth No. 3: The authorities were not saying anything about the disaster and failed to arrange proper evacuation from Pripyat.

"Back in those years, there was no reliable, not to mention independent system to control the radiation environment. It was impossible to receive information real-time. It took quite a while for the authorities to realize what happened and what consequences it would lead to," the expert said.

"The evacuation of nearly 120,000 people was conducted quickly and professionally, although there were mistakes made, of course. "It's not true when they say that people were exposed to serious doses of radiation during the evacuation. I am sure that the population could be returned, but one should have taken measures to decontaminate and clear the territory, which they didn't do," the expert said.

According to Arutunyan, there were three reasons that caused the Chernobyl. First and foremost, the personnel of the nuclear power station violated all instructions and rules during the test program. In addition, he believes that the decision about the delivery of nuclear power plants to the Ministry for Energy of the USSR was a wrong one. The personnel of the ministry was not qualified accordingly. The construction of the reactor was not flawless either.

A tragedy like is not likely to repeat in the modern world, the expert believes.

"After 1986, security systems of nuclear power plants in Russia and abroad was enhanced to the maximum. There are networks of automated systems to control the radiation levels. Both local authorities and any common person may go to a special website where they can find out the real radiation background around any nuclear power plant," the professor concluded.