Putin and the Battle of Borodino 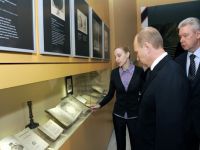 On the 7th of March 2012, President elect Vladimir Putin visited the recently restored Battle of Borodino Panorama Museum on Kutuzovsky Prospekt in Moscow. This year, Russia commemorates the 200th anniversary of the Patriotic War of 1812, when Russians successfully defended their homeland against the invasion of Napoleon Bonaparte's "Grande Armée".

The Battle of Borodino proved to be the turning point in this war, about a third of Napoleon's soldiers were killed or wounded. By withdrawing, The Russian Imperial Army preserved its combat strength, eventually forcing Napoleon out of the country.

In this decisive battle, which took place near Borodino, a village in Mozhaysky District of today's Moscow Oblast, the Russian Imperial Army was led by General Mikhail Illarionovich Kutuzov (1745 - 1813), who is considered to be one of the best Russian generals of the 18th century.

In recognition, Kutuzov was promoted to the rank of Field Marshal and awarded the title "His Serene Highness, Prince of Smolensk" (Kuyaz Smolensky).

Tolstoy characterizes him as a patient and wise leader, which might not be far away from the historic truth. Kutuzov was popular among the Russian troops. He was a brave man who looked out for his soldiers' well-being. Kutuzov strongly believed in the Russian Orthodox Church. Therefore, the clergy regarded him highly, just like Vladimir Putin today.

An obelisk in Borodino and a statue in Saint Petersburg commemorate Kutuzov. Furthermore, a memorial was built in Moscow in 1973 to honor Kutuzov's leadership in the Patriotic War of 1812. An order of the Soviet Union and the Russian Federation is named after him.

Several paintings show the Battle of Borodino, the most famous among them is certainly the panorama view painted by Franz Alekseyevich Roubaud (1856 - 1928), a painter born in Odessa who later settled in Saint Petersburg and worked in the Imperial Academy of Arts, specializing on huge panoramas of Russian battles. His works were so large that special pavilions had to be built to exhibit them.

Putin spent a long time looking at Roubaud's panorama of the Battle of Borodino, 115 metres long and 15 metres high.

It took Franz Roubaud and his assistants nine months to complete this work of art. Featured are 4000 figures in painstaking details, soldiers and horses, flags and weapons, burning wooden houses and smoke curling up to the sky over Borodino.

Kutuzov decided to withdraw the Russian army after this battle in order to save it as long as possible. This came at the price of losing Moscow, whose population had to be evacuated. Moscow was burned down on purpose so that Napoleon's troops would find neither food nor water supplies in the devastated city.

Kutuzov's decision ultimately proved to be right. Napoleon had to retreat and lost most of his "Great Army" on the way back to France.

Putin looked at the display dedicated to Kutuzov in the Battle of Borodino Panorama Museum, which received 400 new items for its collection in 2010 and 2011. We cannot know what went through Putin's mind, but he was surely considering Russia's fate, now and then. The Russian President is also the commander-in-chief of the Armed Forces, responsible for the Federation's security and defense.

Putin studied the display in the exhibition hall which shows the tragic burning of Moscow, Napoleon's short, futile stay in the Russian capital and his final retreat.

Yelena Serebrova, the museum's director, answered Putin's questions and told him certain details in the timeline of the events.
It was Napoleon's hubris that caused his fall.

A painting by Jacques Louis David shows the French Emperor, Napoleon Bonaparte (1769 - 1821), as a little man in tight-fitting clothes, with a slightly protruding pelvis and a round, childish face.

Napoleon's arrogance and unbridled ambition led to his loss of contact with reality. He overestimated his own capability and competence, while underestimating the Russian Imperial Army, the vastness of the Russian territory and the severity of winters in Russia. Suffering and punishment were soon to follow.

Another painting with the title "Peace at all costs!" shows Napoleon in Moscow. Vasily Vereshchagin depicts the French Emperor at the height of his hubris.

We are looking at a square, fattish man with pot belly and a peasant's face. His lips are tightly closed, his eyes fierce and furious because the Russians will not surrender.
His facial expression is still childish, but pouting now. He looks like a peasant bully in a Moscow salon, standing next to an elegant marble fire-place. We expect him to stamp his foot on the ground any moment, shouting "Peace at all costs!"

The costs proved to be high. On the way back the "Grande Armée" was badly damaged, almost annihilated. Over 400,000 French soldiers had set out to conquer Russia, barely 40,000 returned home.

Their horses had no traction on snow and ice, due to lack of winter horseshoes. The French soldiers were not equipped for survival in temperatures below zero.

Many of them froze or starved to death, as the Russians used scorched-earth tactics, burning all the villages the French troops passed through, leaving no food or water for them.

Napoleon was used to foraging and plundering occupied land during his wars, but this was not possible in Russia.

A painting by Adolph Northern shows "Napoleon's retreat from Moscow." The little man is sitting on his white horse, his back bent and head bowed low. The horse is trotting amidst French troops who are wearing torn rags. The snow on the ground is frozen and scattered with dead bodies. The Russian sky hangs full of dark grey, ill boding clouds.

Another painting by Vasily Vereshchagin with the title "Night Bivouac of Great Army, 1812" shows the poor rest of the French soldiers, huddled together under thin blankets, sleeping on frozen earth.

A snow storm is sweeping past them, in the foreground we see a broken wagon buried in heaps of snow. Rows of rifles are pointing upwards into the bluish-green-grey air, and we wonder how many of those soldiers are still alive, how many dead.

Vasily Vereshchagin clearly was no friend of the French. The viewers can feel the painter's satisfaction, depicting the French losses during their shameful retreat.

Some of these sleeping soldiers probably never reached France. They were constantly attacked by Russian peasants and Cossack Light Cavalry.

The Cossack horsemen of the Russian steppes were well suited for reconnaissance, scouting, and harassing the enemies' flanks, rear, supply lines and communication. Napoleon admired the Cossacks. "Cossacks are the best light troops that exist. If I had them in my army, I would go through all of the world with them," he stated.

In his recent article on national security and defense for Russia, the President-elect pointed out that Cossacks will be fully reintegrated into the Russian Armed Forces and receive state pensions.

For Russia, the victory over the French Army in 1812 formed a symbol of strengthened national identity and patriotism.

Mikhail Lermontov, a poet of Cossack origin, romanticized the battle in his poem "Borodino." Composer Pyotr Ilyich Tchaikovsky composed his "1812 Overture" to commemorate the battle.

The Soviet Union released a one ruble coin in 1987, on the 175th anniversary of the Battle of Borodino. Four million of them were minted.

Last but not least, the little village of Borodino is known even in space. A minor planet, 3544 Borodino, discovered by Soviet astronomer Nikolai Stepanovich Chernykh in 1977, was named after the village near Moscow.

In Russia, the Battle of Borodino is reenacted on the first Sunday of September each year.

Losses and suffering are deeply ingrained in the Russian psyche, just like the battles fought and won. The victories gained in the Patriotic Wars form a strong layer in the collective memory of the Russian nation.