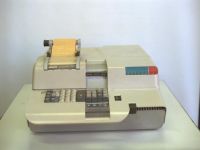 Personal computers have become increasingly popular and have an irreplaceable role in business and everyday life. Whether it's a version of a desktop or laptop, modern computers combine features for flexibility, power and ease of use making themselves indispensable for various activities. Their price has dropped so much over the years that personal computers have gone from a working tool reserved for highly professional environments with significant economic resources to something within the reach of virtually everyone. In many families it is easy to find more than one computer, and all the companies have supplied at least one computer for each employee or worker.

Officially, the date of birth of the personal computer is considered to be 1981 when IBM, the famous American international company, launched the first of a successful series of computers that could fit comfortably on the desk in an office: the model 5150.

Even without a mouse, the IBM 5150 was equipped with a green phosphor monitor, keyboard, up to two floppy drives and numerous software applications and this allowed it to spread rapidly, thanks to the powerful network of sales and service of the U.S. multinationals.

It was thus the entry of computers was definitely laid into areas from which they had been previously excluded.

However, the personal computer was born conceptually much earlier, in 1962, and certainly not due to the work of some lone genius in secret, in an American laboratory. On the contrary, it was in Italy, and by the work of an engineer of a company which until then had dealt with other concerns.

The company was Olivetti, with their headquarters in Ivrea, near Turin. Since its founding in 1908 by the old Camillo, it had always specialized in the production of typewriters and mechanical accounting machines, making huge profits and building a reputation for quality and reliability in Italy and worldwide.

The engineer was Pier Giorgio Perotto, hired by Olivetti, when the founder Camillo was succeeded by his son Adriano. The engineer Perotto began working on some innovative ideas simply because he happened to be little used by the company that paid his salary every month.

Shortly before that, the sale was completed to General Electric of Olivetti's electronics division. It had always attracted many bad feelings in some circles inside Olivetti itself and, unfortunately, also in other Italian companies that had nothing to do with electronics. The young Perotto had openly questioned the foresight of such a choice, and General Electric refused to take on a person who, after considering the views expressed during the negotiations, could prove himself as a potential source of troubles.

The semi-clandestine efforts of engineer Perotto and a few of his other associates, that were also at Olivetti in a unhappy research and development department, took shape in Program 101: an electronic calculator with a conditional jump instruction. i.e. that "if ... then..." allowing the choice between two or more logical alternatives.

Data and instructions were entered through an alphanumeric keypad. It was not like the display devices for all the computer at that time, but the results of processing were readable on a strip of paper with a small printer built into the machine body. The most important accessory in the eyes of a simple user, however, was certainly the integrated magnetic card reader.

These cards, a stiff card with two strips of magnetic tape pasted on, were the real forerunners of the floppy disk and served the same function. They could be written and read in sequence, one card after another, allowing data and programs to be saved for later use.

Program 101 was designed to be modular, so as to be easy to assemble as well as to repair. It was quiet when compared to mechanical accounting machines sold at the time, that were noisy, bulky and having a growing number of gears, sprockets, harpoons.

It weighed about 30 kg, with the dimensions of a professional typewriter, and proved itself easily transportable. It was simple to use and allowed for obtaining required results in seconds instead of minutes or tens of minutes, if not hours, by a gear machine.

The engineer Perotto presented his creation to the New York Fair in 1965 in a small pavilion on the sidelines with respect to the main one where Olivetti showed the final mechanical office products. On these products, and not on the Program 101, the company hoped, ironically, to gain additional market share and revive the glories of the past.

Olivetti, in fact, suffered from the effects of some industrial purchasing mistakes done in previous years and of the economic crisis of the early '60s that ended the Italian economic miracle. The Fair in New York was then a natural opportunity for a new leap forward.

The success of Perottina was such that it soon proved necessary to set up a service in order to regulate the influx of visitors who neglected the most traditional products in order to concentrate on that amazing invention, the potential of which was illustrated in demonstrations, and the public was invited to participate.

Program 101 was obviously much less powerful than the first mainframe computers, with tubes or transistors, but sold at a price of about $3,000 at the time. It cost infinitely less than the enormous machines that still covered entire walls and had no need of teams specialists for its use or a room with air-conditioning to work.

The market was immediately supportive and very receptive to Program 101 to the point that, in the years immediately following, it pretty much sold on its own, with hardly an advertisement needed. Sales were based on word of mouth from one to another.

They all units produced were sold, but many orders were not processed because of the inadequacy of the sales network in the United States and around the world.

NASA bought several copies of P101 for the calculations of Project Apollo and also scientists and engineers in the Soviet Union appreciated the features of Perottina, using it for their research.

The Program 101 was also sold to those who did not belong to the categories provided in the home: plumbers and tailors were among those who bought the P101 for their daily work.

One wonders why the invention of engineer Perotto was greeted with skepticism and hostility within the same company that produced and marketed it with a good margin of profit.

Olivetti, in fact, was never able to exploit the initial advantage against other companies. From a position of absolute, albeit unexpected, advantage in computing, the company gradually fell into a limbo where it still stands, effectively disappearing from the national and international scene too.

That was and is a textbook case of all those things that a good company's management must not do if it wants to preserve the success of good ideas and the profits that may result.
The reasons for the progressive failure of

Olivetti was the object of a plot organized by some powerful business and industry in American circles who did not appreciate the achievements of the Italian company.

Perhaps there is some truth in this, but the unfortunate fate of Olivetti is due, most probably to the characteristics of Italian society.

In Italy, there is what is commonly called "Italian genius" and the ability of some individuals to create wonderful things that nobody before them had imagined could exist. But this is rather an expression of the weakness of the Italian society and not of its strength.

It's a cultural weakness that prevents the full understanding of the creative efforts of a few and then transfer them to industrial production, relegating the invention to explosive, but episodic occurrence, rather than continuous and daily progress.

The Italians, sorry to say, can also be masters of partisanship and controversy, the same situation against which George Perotto found himself having to collide with in his long tenure at Olivetti. The figure of Adriano Olivetti, in some ways a visionary like Steve Jobs, but with a higher civilization and humanity, was not sufficient to mitigate the most negative features of national character, although Olivetti was already a center of excellence in production, research and design.

The premature death of Adriano Olivetti, and economic crisis of the early '60s, did not allow the consolidation of a totally new industrial policy in the Italian industrial landscape. Adriano's son, Roberto, did not prove himself capable of reversing or at least monitoring the more traditional trends of the company leadership, even when it was confronted with the successes of P101.

The arrival of external partners to Olivetti, implemented with the help of national financial circles in order to balance the books of the company, still forced attention on mechanical devices. This proved fatal for the most innovative ideas, and contributed to stagnation and the loss of the initial advantage that should have been obtained due to the work of Perotto and a few others.

In some ways, the Italian industrial history is made by eagles, thinking like chickens: they self-censor and don't understand the true extent of the most innovative ideas that sprout around them.

The companies end up losing any initial advantage to more receptive and resourceful competitors. This is precisely what happened at Olivetti, ignoring the coming electronic revolution, and continuing to develop obsolete mechanical products despite the innovation that Program 101 offered.