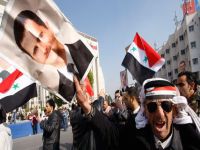 Official: It is a Conspiracy

It was political analyst Mahdi Darius Nazemroaya, in November 2006, who wrote in detail(i) of US plans for the Middle East:

"The term 'New Middle East', was introduced to the world in June 2006, in Tel Aviv, by U.S. Secretary of State Condoleezza Rice (who was credited by the Western media for coining the term) in replacement of the older and more imposing term, the "Greater Middle East" he wrote.

Sanity dictated that this would be a U.S. fantasy rampage too far and vast - until realization hit that the author of the map of this New World, planned in the new world's "New World Order," was Lt. Colonel Ralph Peters, who, in one of the most terrifying articles ever published, wrote in 1997:

"There will be no peace. At any given moment for the rest of our lifetimes, there will be multiple conflicts in mutating forms around the globe. Violent conflict will dominate the headlines ...The de facto role of the US armed forces will be to keep the world safe for our economy and open to our cultural assault. To those ends, we will do a fair amount of killing."(ii) (My emphasis.)

At the time, Peters was assigned to the Office of the Deputy Chief of Staff for Intelligence, where he was responsible "for future warfare." His plans for Iraq worked out just fine - unless you are an Iraqi.

A month after Nazemroaya's article was published, William Roebuck, Director for the Office of the State Department's Bureau of Near Eastern Affairs, was composing an end of year strategy for Syria(iii) from his study in the U.S. Embassy in Damascus, where he had been based between 2004-2007, rising to Deputy Chief of Mission.

The subject title was "Influencing the SARG (Syrian Arab Regime Government) in the end of 2006."

"The SARG ends 2006 in a much stronger position domestically and internationally (than in) 2005." Talking of President Assad's "growing self-confidence," he felt that this might lead to "mistakes and ill-judged ... decisions ... providing us with new opportunities." Whilst "additional bilateral or multilateral pressure can impact on Syria," clearly he had even more ambitious plans:

"This cable summarizes our assessment of ... vulnerabilities, and suggests that there may be actions, statements and signals, that the USG (US Government) can send that will improve the liklihood of such opportunities arising."

The proposals would need to be, "fleshed out and converted in to real actions and we need to be ready to move quickly to take advantage of such opportunities." (no, not le Carre, Forsyth, or Fleming, "diplomat" in Damascus.)

"As the end of 2006 approaches," wrote Roebuck, "Bashar appears ... stronger than he has done in two years. The country is economically stable ...regional issues seem to be going Syria's way."

However, "vulnerabilities and looming issues may provide opportunities to up the pressure on Bashar ... some of these vulnerabilities (including the complexities with Lebanon) can be exploited to put pressure on the regime. Actions that cause Bashar to lose balance, and increase his insecurity, are in our interest."

The President's " mistakes are hard to predict and benefits may vary, if we are prepared to move quickly and take advantage of opportunities ..."

In the light of the proposed tribunal into the assassination of Lebanon's former'Prime Minister, Rafic Hariri (14th February 2005) who was killed with his friend, former Minister of the Economy, Bassel Fleihan, and twenty colleagues and bodyguards, with a huge bomb, detonated under his motorcade, this "vulnerability" could be exploited.

Unproven allegations have pointed the finger at Israel, Syria, Hezbollah and a myriad others, as behind another Middle East tragedy, but Roebuck regarded it as an: "opportunity to exploit this raw nerve, without waiting for the formation of the Tribunal."

Another idea outlined under a further "vulnerability" heading, was the growing alliance between Syria and Iran. "Possible action" was to "play on Sunni fears of Iranian influence." Although these were "often exaggerated," they were there to be exploited:

"Both the local Egyptian and Saudi missions here ... are giving increasing attention to the matter and we should co-ordinate more closely with their governments on ways to better publicize and focus regional attention to the issue." Concerned Sunni religious leaders should also be worked on. Iraq-style divide and rule model, writ large.

The "divide" strategy, of course, should also focus on the first family and legislating circle, with " targeted sanctions (which) must exploit fissures and render the inner circle weaker, rather the drive its members closer together."

The public should also be subject to "continual reminders of corruption ... we should look for ways to remind ..." Another aspect to be exploited was "The Khaddam factor."

Abdul Halim Khaddam, was Vice President,1984-2005, and acting President in 2000, during the months beween Bashir al Assad's accession and his father's death. Thought to have Presidential ambitions himself, there was a bitter split between Khaddam and al Assad after Hariri's death. Allegations of treasonous betrayal by Khaddam have validity.

The ruling party, writes Roebuck, "...follow every news item involving Khaddam, with tremendous emotional interest. We should continue to encourage the Saudis and others to allow Khaddam access to their media ... providing him with venues for airing the SARG's dirty laundry."

As a result, anticipated was "an over reaction by the regime that will add to its isolation and alienation from its Arab neighbours."

On January 14, 2006, Khaddam had formed a government in exile, and had predicted the end of the al-Assad government by the year's end. He is currently regarded as an opposition leader, and has claimed, on Israel's Channel 2 TV.(iv) receiving moneys to help overthrow the Syrian government, from the U.S. and E.U.

The ever creative Mr Roebuck's further plans included: "Encouraging rumours and signals of external plotting." To this end, "Regional allies like Egypt and Saudi Arabia should be encouraged to meet with figures like Kaddam and Rifat (sic) al Assad, with appropriate leaking of the meetings afterwards. This ... increases the possibility of a self-defeating over-reaction."

Rifaat al Assad, Bashir's uncle, was in charge of the Defence Brigade, and killed up to thirty thousand people in, and flattened much of, the city of Hama, in February 1982. So much for endlessly trumpeted concerns for "human rights violations." Rifaat al Assad lives in exile and safety in London. Khaddam lives in Paris.(v)

Here is a serious cause for concern for the overthrow-bent: "Bashar keeps unveiling a steady stream of initiatives on reform and it is certainly possible he believes this is his legacy to Syria .... These steps have brought back Syrian expats to invest ... (and) increasing openness."

Solution? "Finding ways to publicly call in to question Bashar's reform efforts." Indeed, moving heaven and earth to undercut them, is made clear.

Further: "Syria has enjoyed a considerable up-tick in foreign direct investment," thus: foreign investment is to be "discouraged."

In May of 2006, complains Roebuck, Syrian Military Intelligence protested "what they believed were U.S. efforts to provide military training and equipment to Syria's Kurds." The Iraq model, yet again.

The answer was to: "Highlight Kurdish complaints." This, however: "would need to be handled carefully, since giving the wrong kind of prominence to Kurdish issues in Syria, could be a liability for our efforts ... given Syrian ... civil society's skepticism of Kurdish objectives."

In "Conclusion", this shaming, shoddy document states: "The bottom line is that Bashar is entering the New Year in a stronger position than he has been, in several years", meaning "vulnerabilities" must be sought out. "If we are ready to capitalize, they will offer us opportunities to disrupt his decision-making, keep him off balance - and make him pay a premium for his mistakes."

The cable is copied to: The White House, U.S. Secretary of State, U.S. Treasury, U.S. Mission at the UN, U.S. National Security Council, CENTCOM, all Arab League and EU countries.

The only other U.S. Embassy copied in, is that in Tel Aviv. When William Roebuck worked at the Embassy in Tel Aviv (2000-2003) embracing the invasion of Iraq year, he "narrowly missed assassination." Perhaps someone there, too, thought he was hard to warm to.

In 2009, he was Deputy Political Consul In Baghdad, "leading efforts to support the critical 2009 Iraqi elections." The "free and fair, democratic" ones, where people were threatened with the deaths of their children even, if they did not vote the "right" way.

The result was Nuri al Maliki's premiership, complete with his murderous militias. The man under whose Ministry of the Interior, U.S. soldiers discovered tortured, starving prisoners.

The Damascus cable comes courtesy Wikileaks. Lt. Colonel Peters called, on Fox News, for founder, Julian Assange, to be assassinated. The forty second clip(vi) is worth the listen.

The Colonel also writes fiction and thrillers under the name Owen Patterson. Perhaps he is living the dream.