The west, and particularly the USA, are turning the Middle East and North Africa into a no-man's land. It's become a place where no one is safe and there is complete and total instability. There are kidnappings, rapes, mutilations, burnings, hangings, beheadings...every savagery the mind can conceive of and more. 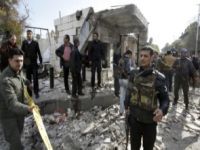 All this is thanks to the terrorists the west and the USA have trained, armed and funded.

Russia and China vetoed a UN Security Council resolution on Syria. Moscow and Beijing explained that if adopted, the resolution would enable NATO to 'replay' the Libyan scenario in Syria. There have already been several attempts to do so.

Two blasts rocked the city of Aleppo in Syria on Friday as terrorists attacked military intelligence offices and interior troops' barracks. The attacks killed 30 people and left more than 170 injured. These huge simultaneous twin-bombings in Aleppo are obviously the work of an intelligence agency, most likely the CIA, due to their size and method.

Neither are the weapons being found on the terrorists of the type you would normally think would be found on your average Syrian.

The Syrian people are under attack from a foreign power and they know it, which is why they have turned out in massive pro-government demonstrations, not reported by western corporate media.

That brings us to the current plotting and scheming. Pravda.Ru is informed by Syrian sources that there has been movement of chemical agents among the terrorists and that a false flag operation is planned for Valentine's Day.

A massacre of colossal proportions will be blamed on the Assad government forces in order to bring down the weight of the western war dogs on Syria and to force Russia to change its balanced call for dialogue and diplomacy.

This must not be allowed to happen, so we are giving notice here and now that plans for such an attack are underway, just like the Homs false flag, timed exactly for the UN resolution vote.

Syrian people are reporting that many of the "dead" are seen walking around the next day. Numerous are the reports of terrorists working with western media to spread false reports, Hollywood backdrops out of Qatar, films made in other Arab countries showing extreme repression against demonstrators and claiming it happened in Syria.

After failure to gain support in the UN Security Council for further interference in Syria, the western countries, particulary the USA, have been stomping their feet like spoiled, petulant children. One of their first pronouncements was that "we must provide weapons to the opposition." Read to the terrorists.

The problem with this being that they have already been pouring arms, money and training to the terrorists...nothing new here, move right along.

"We must consider, among other actions, providing opposition groups inside Syria, both political and military, with better means to organize their activities ..., to defend themselves, and to fight back against Assad's forces," urged the three US senators.

Their "Free Syrian Army" is neither free nor Syrian. They are a gang of thugs and terrorists, attacking military leaders and ordinary Syrians.

They began their terrorist activity by attacking barracks, police on duty and setting fire to tires to attract police so that they could fire upon them.

How would such activity be met in any western country? Well we see what they are doing to unarmed OWS protesters: beating, tasing and every type of indignity. And these are unarmed people.

The Assad government has been more than willing to engage in dialogue and reform, but this does not sit well with the west or their terrorist stooges, whom they have directed to refuse all such negotiation.

The bottom line is that the west sees Syria's strategic position in the Middle East and believes that by toppling Assad that they can also weaken Iran.

Before we come to a close here, we also wish to mention another situation. It seems that many MIG29s have been sent from Hungary to Israel. Most likely the markings are going to be changed into Iranian markings, at which time they will use these aircraft to be sacrificed for a "Pearl Harbor" type attack, justifying the long sought after war against the Islamic Republic of Iran.

'Praemonitus, praemunitus' forewarned is forearmed. A word to the wise should be sufficient. The world community is not prepared to accept any further manipulations or lies from the west.

The people of Syria should be left to determine their own future and the west must cease and desist from agitation and arming terrorists. Let them cram their "war on terror" where the sun don't shine. They have done more to promote the practice of terrorism than anyone in history.

The arrogance of westerners puffed up with "human rights" hubris helps Mossad, CIA and MI6 to sell war over and over again, and it must stop. I received in the mail just this morning an urgent appeal from Amnesty International doing just that and I told them what they could do with it.