Somalia: Under the tutelage of ghost-lords 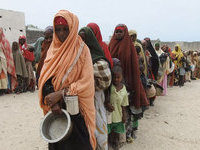 At this dreadful moment in its history-when the obituary of a nation in life support is being written-political correctness is a luxury that Somalia cannot afford. Yes, Somalia is a failed State. But, failure is not a permanent condition, unless people choose to make it so by retiring their dignity and spirit of resilience.

Since the collapse of the military government 21 years ago, Somalia went through various levels of problems perpetuated by clan militias, warlords, economic-lords, religious-lords, regional-lords, and a group that I would refer to as the Ghost-lords. All except the latter were domestic phenomena, and as counter-intuitive as it may seem, the Ghost-lords is the most elusive and perhaps the biggest obstacle to the reconstitution of the Somali state. Yet it remains the highest international authority that oversees every aspect of the political process in Somalia.

The Ghost-lords are a loose association of paradoxical powers of the Good, Bad, and Ugly of International Community. They come with all kinds of stripes, creeds, dogmas, and political and economic opportunism; they work together and work against each other; they provide solutions and problems, enticements and threats, good governance and corruption.

Of course this is not to say that there is a covert web of conspiracy connecting every aspect of the Ghost-lords. There is no evidence that each of the elements that make up the Ghost-lords is driven by the same objective. In fact, there is ample evidence to the contrary as certain elements within that group have interests that are clearly at odds with one another, especially on who should engineer the post civil-war Somali State and whose interest should that state serve.

While there certainly are domestic factors that keep Somalia divided, nothing has exacerbated the downward spiral to balkanization more than Ethiopia and United States' respective policies toward that nation. Ethiopia's Building Blocks or Frag-D-Frag approach (fragmenting the fragmented) offers military trainings and weapons to any and all political actors on the ground, despite the UN weapons embargo on Somalia (92). Coupled with the US' Dual-Track policy which provides political legitimacy and financial incentives to any and all political actors so long as they stand opposed to al-Shabaab, even if said actors are on a path that makes the reconstitution of the Somali State extremely difficult, if not impossible.

Currently, there are at least 25 Village and Regional States within the country with their own Presidents, Defense Ministers, Foreign Ministers, etc. The International Community not only accepts these actors as the legitimate stakeholders who could function as independent Mini-States, it encourages other such entities to be formed as it reserves space for what it calls "Emerging States".

Ironically, the Transitional Federal Government (TFG) that theoretically represents Somalia in the United Nations and is recognized by all international institutions is placed in a political straitjacket that practically handicapped its decision-making authority. At this stage of the political process, any of the above-mentioned 25 Mini-States has more authority to make any political and economic decisions without earning the wrath of the Ghost-lords.

Marching to the cacophonic drumbeats of the Ghost-lords became the only source of political legitimacy, even if the march leads to what might be against Somalia's national interest. Today, the TFG and theTransitional Federal Parliament (TFP) are under extraordinary pressure from people who are not part of the indigenous stakeholders such as regional administrations or local civil societies to expedite the ratification of a controversial draft constitution that the United Nations Development Programme (UNDP) claims to have spent $60 million that has more holes than Swiss cheese. All that before any genuine reconciliation has taken place.

"As I have mentioned before, finalizing the draft Constitution before the May deadline must be a top priority now," wrote the UN special Representative for Somalia, Ambassador Augustine Mahiga in a letter published on Jan 26th. Then he added this stiff warning to the TFP "One of the key problems remains the ongoing impasse within the Parliament. I have impressed upon the leaders that the region and the international community demands that it is resolved quickly. As I have constantly reminded all parties, spoilers of the peace process will not be tolerated and non-compliance will result in decisive action."

In fairness to the TFP, despite its occasional display of unprofessionalism, has on this occasion exercised its legitimate authority and employed a democratic process replacing its Speaker via a vote of no confidence- a decision that has considerable public support. Yet, they are considered "spoilers of the peace process"! Apparently, the TFP has ousted a man of great value to the Ghost-lords.

It is against this backdrop that British Prime Minister David Cameron called the London Conference on Somalia (Feb 23). The conference is supposed to attract some Heads of States and high-level representatives from 40 different countries, mostly from donor nations. The conference organizers ought to be commended for the interest and momentum they have generated in a few months. The expectation is high. However, the question is: how much can one expect from such a congested half-a-day conference?

In addition to its strategic geopolitical importance, it's now a public knowledge that Somalia is rich in natural resources such as oil and minerals such as uranium. Granted, this could be a curse or a blessing. While this news and the Somali State's disintegration into balkanized political entities (who are free to sign any deals with any one) might make economic predators drool with temptation, all those who are interested in peace, security and environmental welfare should be seriously concerned. Who would stop any such political entity from going into a contract with some mercenaries or rogue private security firms to mine uranium? Who would protect the public interest and set up strict policies to protect against environmental problems that could ensue from mining such hazardous minerals? How would such Non-State actors be kept in compliance with the International Atomic Energy Agency (IAEA) as they are not members of the UN? And who would prevent that uranium from reaching the black market?

Solving the Somali political problem would require a new paradigm and partners who are less intrusive honest brokers. Somalia needs a decentralized unitary government and a national army to safeguard its collective security. But not before an indigenous reconciliation that includes Somaliland takes place, and not before a new constitution that specifies the individual and state rights as well as the legal authority to land and natural resources is collectively negotiated and ratified. Somaliland is indeed the missing link.

Abukar Arman is Somalia Special Envoy to the United States