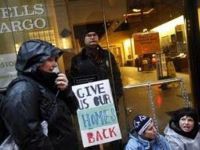 On Saturday, the outraged Movement summoned those on its digital website to celebrate a day called Day of Change to occupy houses empty or abandoned due to the foreclosure crisis that is shaking the U.S. The police deployed smoke and tear gas to try to subdue outraged persons when they tried to go under a fence in order to occupy a building. Police arrested 19 people, AFP reported.

The march was conducted with more than 1,000 protesters and ended in front of the Henry Kaiser Convention Center in Oakland, and despite police attempts to disperse the angry crowd, they met again at the Frank Ogawa Plaza.

"If the police are ready to defend property rather than people, I think this shows what the priorities of the city are," said Carla Orendorff, a 23 year old student who participated in the march.

In the United States, 2.2 million indebted people lost their homes because of the foreclosure crisis that began in 2007.

Last December 6 to 8, an OWS march of solidarity with the families who lost their homes as a result of this crisis was held in Washington.

The OWS movement began on 17 September against the unjust distribution of wealth in the country, and the excessive influence of large companies in U.S. policies, It spread to many countries worldwide, including Australia, Britain, Germany, Italy, Ireland and Portugal,

The Movement has the support of renowned intellectuals, religious and public figures. About 5,861 people have been arrested since the beginning of the creation of the movement.