Australian Prime Minister Julia Gillard barely escaped an angry crowd of Australian Aborigines who were protesting against the celebration of Australia Day, celebrated annually on January 26. Nearly 200 protesters attacked her after a meeting with the opposition leader Tony Abbott on her way to her car.

50 policemen guarding her could not contain the anger of the crowd. Gillard's bodyguard was forced to cover her with his body to protect her from the angry natives who got her right shoe as a trophy. 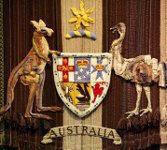 On January 26, 1788 Captain Arthur Phillip established the first colony in Australia - New South Wales. For the Australian Aborigines January 26 is the "day of the invasion of aliens and the seizure of the motherland." Traditionally, Australia Day celebration is accompanied by mass protests of the indigenous population.

Aborigines state that in 1788 the number of their ancestors on the Green continent was 700 thousand. By 1921 it had dropped to 60 thousand people as a result of epidemics brought by the whites, alcohol, displacement of indigenous Australians in environmentally adverse desert areas and their conscious annihilation.

In recent years, the authorities have been reporting that the issue with the natives has been solved, indicating that the state and public organizations actively help them. The aid has resulted in rapid growth in their numbers: in 2001 there were already 437,000 people.

Key achievements in the fight for their rights have been made by Aboriginal population in 1960s. In 1962 they won the right to vote; in 1967 they obtained the right to choose their government nominees. In the same year the right of Aborigines to obtain Australian citizenship was confirmed. Since the late 1960s, they developed a successful struggle for the revival of cultural identity and obtaining legal rights to land.

A key date in the recognition of Aboriginal rights is believed to be 1985, when the government returned to them the sacred rock of Uluru in Autbek desert.

In 1989, Aborigines were granted the right for self-government. Three years later the High Court of Australia acknowledged the illegality of the persecution of Aborigines at the so-called "no man's land" (uncultivated land).

In 1999 the Australian Parliament apologized before the indigenous Australians for the abuse, calling it "the most flawed chapter in the nation's history." A year later, in 2001, the government held a symbolic ceremony of reconciliation with Aboriginal people in Canberra.

Finally, in 2010 the Australian government proudly announced that they were able to solve the problem of Aboriginal people as for the first time in its history native Australian Ken Vuat became a member of parliament.

However, the situation with Julia Gillard has shown that these statements were premature. White Australians are wondering what else they can possibly dream about. The government is already spending huge funds, building their houses, providing them with additional medical personnel and police, cajoling Aboriginal money.

Aborigines say that the white strangers will not be able to pay them off, and indicate that their income is 40 percent lower than that of other Australians. In turn, their opponents have reproached them because "children of nature" want to get everything from life and are not willing to "profess the religion of white people" - regular job, but prefer to seek increasingly more handouts from the authorities.

There are some odd claims for the "white colonialists." For example, in February of 2010, Special Rapporteur Aboriginal James Anaya spoke in the UN, condemning the Australian authorities for their "oppression of indigenous rights." He complained that the white racists did not allow him to enjoy pornography and alcohol.

Incidentally, the use of the latter is one of the main reasons why Aboriginal people live on average 17 years less than other Australians.

The struggle of Aboriginal Australians for their rights is not over. Of course, they are quite capable of getting additional monthly handouts from the white colonizers that they would once again spend on alcohol. Who knows how far indigenous peoples of the Green continent are willing to take the struggle?