January 27, the Holocaust and Revisionism

January 27 commemorates the day that the Soviet troops entered and liberated the concentration camp of Auschwitz in 1945. The UNO uses this day as a benchmark but let us use every day as a benchmark against intolerance, exclusion, racism and xenophobia. For this reason I choose to publish this article on January 29. Every day is valid. 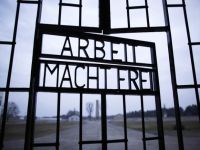 Every day is valid and we are not speaking here only about Jews. If we speak of Auschwitz, then we should speak of all the concentration camps opened and maintained during the 1930s and 1940s - not yet one hundred years ago - and if we speak of Jews, then we should also speak of the homosexuals, the Romany and many others killed and abused during this period and since.

In fact, why do so few people speak about the many concentration camps in the Baltic States, the darlings of the anti-Soviet West? Here they are: The concentration and extermination camps in Latvia were not one or two. Apart from the infamous Mezaparks Camp at Kaiserwald near Riga, there were Daugavpils, Lenta, Liepaja, Strazdu Manor, Dundaga, Jelgava, Valmiera, Salaspils and Jumpravmuita. Between 70,000 and 85,000 Latvian Jews were exterminated in these camps, which counted on the willing collaboration and active participation of a substantial number of Latvians.

Lithuania: 135,000 and 220,000 people exterminated. Few survived the horrors of the camps at Kovno (Kaunas), Kauen, Slobodka, HKP at Vilna and Prawienischken.

And today, since 2000, how many concentration camps have the United States of America opened? How many people have been tortured to death by the United States of America and its lackeys in NATO? How many people have been detained in concentration camps without the right to see their families, without even an accusation, or the right to a free and fair trial?

So when we remember the horrors of the concentration camps in the 1930s and 1940s, and let us also investigate the truth and not the lies and the hype, let us examine whether people in certain camps were killed in gas chambers (by the thousand) or on the gallows (in dozens), let us also examine the consequences of the acts of the FUKUS-Axis (France, UK, US and Israel) since 1945 and let us reach some conclusions.

What happened at Auschwitz, and Mezaparks and Kaiserwald and Daugavpils and Lenta and Liepaja and Strazdu Manor and Dundaga and Jelgava and Valmiera and Salaspils and Jumpravmuita and Auvere and Aseri and Dorpat and Ereda and Goldfields and Idu-Virumaa and Illinurme and Jagala and Johvi and Kalevi-Liiva and Kivioli and Klooga and Kukruse and Kunda and Kuremae and Lagedi and Narva and Narva-Joesuu and Petschur and Putki and Saka and Stara Gradiska and Sonda and Soski and Tartu and Vaivara and Viivikonna and Wesenburg and Kovno (Kaunas) and Kauen and Slobodka and HKP, Vilna and Prawienischken was unacceptable.
And let us not deny that it happened. It did... and there is evidence. What happened at these places, and Abu Ghraib and Guantanamo Bay more recently cannot be condoned by any civilised human being. Why then does the world focus so much on one aspect of history and pretend the other does not exist?

Is the USA of today and its Satanic allies in NATO not guilty of far worse crimes than those of Nazi Germany half a century ago?