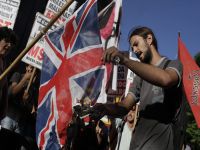 Argentina denies accusation of British Prime Minister on Falklands...David Cameron accused them of "colonialism" by claiming the sovereignty over the islands

The Minister of Foreign Affairs of Argentina, Hector Timerman, contested on Wednesday (18th) the Prime Minister of the UK, David Cameron, who accused Buenos Aires of "colonialism" by claiming sovereignty over the Falkland Islands.

"Any country, any people who know a little of colonialism know that Argentina is not a colonial country," Timerman said at a news conference in El Salvador.

In the weekly questions session in the House of Commons (lower house of the British Parliament) on Wednesday, Cameron accused Argentina of "colonialism" in the history of Buenos Aires. They claim sovereignty over the Falklands/Malvinas, dominated by the United Kingdom.

The Argentine Interior Minister, Florencio Randazzo, also expressed to the press in Buenos Aires that Cameron's statements "are absolutely offensive."

Argentina argues that the conflict must be resolved by peaceful means, said Timerman, who completed a visit to El Salvador as part of a Central American tour that included Panama and Honduras, and will continue on Thursday (19th) in Costa Rica.

"Argentina has argued for decades that the only way to resolve the question of the Malvinas issue and the question of our claim since 1833, when there was the British invasion, is through dialogue and peaceful negotiation," stated the Foreign Minister of Argentina. He said it is well to indicate that there are "11 resolutions of the General Assembly of the United Nations and more than 29 Anti-colonialist Committee (of the United Nations) declarations."

"As Britain gets to know the reality of Latin America, we will be able to come closer to a solution," said the chancellor, who said that Argentina's claim was transformed into "a Latin American cause.