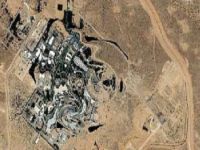 "We have the capability to take the world down with us. And I can assure you that that will happen, before Israel goes under." (Remarks of Martin Van Creveld, Professor of Military History at Israel's Hebrew University, September 2003, in Dutch weekly, Elsevier..,)

Iran: We have been here before. The year before the assault on and near destruction of unarmed neighbouring Iraq, George W. Bush, of course declared the "Axis of Evil," Iraq, Iran and North Korea.

But it was the man now hailed "peacemaker," former President Jimmy Carter, who, in his State of the Union Address on 23rd January 1980, made the most chilling statement - until the current political psychopathy - regarding a possible nuclear strike on Iran.

Very simplisticly put, the then Soviet Union supported Afghanistan's leftist government, and eventually invaded the country in their defence, against challenges by the traditionalist, conservative Muslims, and (US backed) Mujahideen.

The Carter Administration at the time seemed not too bothered by the invasion, a few trade sanctions were imposed here and there, but no more. The plight of Afghanistan's people of little consequence. However, neighbouring Iran with its vast oil reserves and the threat to Western oil supplies in shipping passing through the Straits of Hormuz, then, as now, was a different matter.

"An attempt by an outside force to gain control of the Persian Gulf region will be regarded as an assault on the vital interests of the United States of America ... such an assault will be repelled by any means necessary, including military force." (i)

Later, a US Defence Department Report, seemingly leaked by the Administration, stated that should the Soviet Union invade Northern Iran, the use of nuclear weapons would be considered.

However, the Soviet Union too had nuclear weapons, so in those, now, ironically, safer seeming days of "Mutually Assured Destruction" ("MAD") the US simply contented itself with arming the Afghan Mujahideen - which it is now slaughtering, droning, taking body parts of as trophies - and urinating on.

The Carter Administration simply contented itself with building a Rapid Deployment Force, expanding the US naval presence in the Persian Gulf and Indian Ocean.

Carter won the 2002 Nobel Peace Prize for his work: "to find peaceful solutions to international conflicts."

Further ironically, the United States, in 1957, had embarked on a civil nuclear policy with Iran, as part of the "Atoms for Peace" programme.

In the 1970s the US supported the building of up to twenty nuclear power plants throughout Iran. Contracts were signed with a number of other Western countries.

In 1975, Iran signed a contract with the Massachusetts Institute of Technology (MIT) for training of Iran's nuclear engineers. (ii)

Incidentally, Iran ratified both the Partial Nuclear Test Ban treaty of 1963 and the Nuclear Non-Proliferation Treaty of 1968. Israel, another of the sabre rattlers, has signed neither.

Bombing nuclear reactors is beyond even the actions of the certifiably insane. On 26th April 1986, the world's worst nuclear disaster, until 2011 and Fukushima, was Chernobyl.

When an explosion blasted a hole in the roof of the plant, tons of radioactive material were blown into the atmosphere and traversed the world. To this day there are hill farmers in the UK whose sheep are still found to be too radioactive from the resultant fallout nearly 2,000 miles away, twenty six years ago - to sell for meat.

The people in the Chernobyl region were exposed to radiation about one hundred times greater than that from the Hiroshima bomb. Since, thousands have become ill and died of cancers and other diseases.

Over four hundred thousand people had to leave their homes. The water of Ukraine and Belarus is still affected, the ground in which they plant still contaminated.

There have been a litany of nuclear accidents over the years, the first, which remained the worst until Chernobyl, was at the Windscale plant on the UK's (western) Cumbria Coast. The British responded by changing it's name to Sellafield.

When Pan Am Flight 103 was blown up over Lockerbie, on 21st December 1988, hearing the news flash, I picked up a UK atlas. It was close enough for wreckage to have fallen on and damaged the plant. A call to a shaken operative at Sellafield within minutes of the crash, caught him off guard, they were, he said: "combing the (vast) compounds for debris and damage right now ..."

The wreckage from Pan Am's tragedy was strewn one thousand square miles. (iii) Sellafield was just forty eight miles away, under the main trans-Atlantic air route. Depending on the exact route of the flight, potentially, a few minutes later the disaster could have been even more appalling, by orders of unimaginable magnitude.

The route, incidentally, has not been changed.

Whilst somewhat off topic, this tragedy illustrates what has been repeatedly studied - and ignored: "Nuclear plant operators have normally considered accident sequences (called 'beyond design basis'events) so unlikely that they have not built in (sufficient) safeguards." (iv) These include tsunamis, earthquakes, air crashes, terrorist attacks - and deliberate bombings.

These stark vulnerabilities are hardly likely to have escaped Pentagon planners.

In an article published in the early 1980's, as valid now, as then (see i., p 60-61) Dr Kosta Tsipsis of MIT and Steven Fetter, wrote in Scientific American on: "Catastrophic Releases of Radioactivity."

A one-megaton nuclear weapon on a one-gigawatt nuclear power plant would vaporise the plant's radioactive contents, along with everything (and everyone) in the vicinity. The remains would be carried on the wind in a mushroom cloud, falling out to poison people, fauna, flora, where the wind blew. Some seventeen hundred square miles would be uninhabitable immediately due to potentially lethal radiation levels.

"The destruction of a nuclear reactor with a nuclear weapon, even of a relatively small yield ... would represent a national catastrophe of lasting consequences," Tsipsis and Fetter wrote in an earlier paper.

Further, in a more extensive attack: "If .anyone hid (themselves) deep enough under the earth and stayed there long enough to survive, (they) would emerge to a dying natural environment ... there is no hole big enough to hide all of nature ..."

I have witnessed those affected by a reactor bombing, just a small experimental one, part of Baghdad University, prior to the invasion. It was bombed by British or American ' planes, three times, in spite of having been permitted by the UN weapons inspectors. The childhood deformities in the area were epidemic. One clinic specialized in treating the young victims. This is what I wrote, a decade ago:

"Six month old Yacoub Yusif, with his small hand twisted at right angle, with no thumb on his foreshortened right arm, was comparatively lucky.

"Six year old Mustafa Ahmed, with his bright, intelligent face and great dark eyes had gross deformities of his stick-like legs and arms, of his facial bones. His hands were pathetically turned.

"Sitting on the examination table like a frail broken doll, he said: "I can write." Hunched over, a tiny piece of pencil (pencils are vetoed by the Sanctions Committee, since they contain graphite) and minute square of paper (also vetoed) he wrote, the stub clutched between his knuckles, in beautiful Arabic, laughing with triumph at his achievement.

"Ali Samir, seven, shuffled in like a tiny, bird-like old man, the expression in his eyes was of one who has seen all the trials of the world.

"He was covered with head to toe ulcerations which, as they healed tightened his skin - or ruptured. His fingers were turned inwards, seared into his palms. He had no toes.

"When his 'Route 97' top was lifted up, the terrible ulcerations on his back brought tears to the eyes. 'Surgery is counter-indicated, since he won't heal - this is a genetic malformation caused by environmental changes in pregnancy', said Consultant, Dr. Harith, with commendable undersatement.

The Zafaranya district of Baghdad where he - all of them - lived, was bombed relentlessly in the 1991, Gulf War and a nuclear reactor reportedly hit. It was bombed again in 1993, and Ali was still recovering from this terror in December 1998, when the district - and believed the reactor, was hit again. He too could write and did so with evident pride - but he was unable to express it - he had no tongue."

And what of the fear now being inflicted on the children of Iran, the Middle East, this Damoclesian sword hanging over them?

I thought again of the late, great John E. Mack, psychiatrist of renown, who studied under Robert Jay Lifton, who has made the psychology of war and violence his distinguished lifetime's work.

Before the Berlin Wall came down, when children in school were taught what to do if "the bomb" fell, in government fantasy world, instruction booklets, Mack received a call from the frantic mother of a five year old.

The little boy, apparently happy, well adjusted and without a care, stood as she cooked supper. Suddenly he asked her: "When the bomb drops, will the rabbit in the garden die too?"

How many more generations of children is nuclear insanity going to terrorize?

As this is being written, on 17th January, the twenty first anniversary of the first near destruction of Iraq, in "Desert Storm," another US President and Nobel Peace Prize winner seems to be taking the world to the brink.

The world needs no further wake up calls, from Windscale to Baghdad's Zafaraniya, Chernobyl to Fukushima, from Falluja's radiation affected population, the forgotten affected of the Pacific Island tests over fifty years ago, and worldwide - enough .