Sport as a peacemaker

Sport as a peacemaker 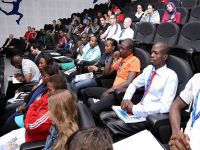 The United Nations Organization is promoting the non-political theme of sport as a means to bring together young people from different communities, especially from those that have been through episodes of violence. Recent examples of youth camps concentrating on sport have shown promising results.

It is difficult to envisage groups of children or young people brought up in climates of endemic violence, mistrust and hatred brought about by cycles of conflict, sometimes through several generations, sitting side by side discussing common themes or playing together. But this is exactly what is happening in the UN-sponsored camps.

One such example was last year's Youth Centre development project in the border region between the Democratic Republic of the Congo and Burundi, an area of ethnic violence over the last decade. The project aims to be a neutral area where, in the words of the UN Special Advisor on Sport for Development and Peace, Wilfried Lemke, young people can gather, communicate, learn, have fun and construct a new future for themselves, together," adding that "on these new sports grounds, a fresh start is possible."

The centre was set up in Gatumba, Burundi, where in 2004, the refugee transit camp was the scene of horrific violence between Hutu and Tutsi and resulted in the massacre of 152 Tutsi refugees and the wounding of 106 others. Mr. Lemke paid homage to the similar projects set up in hotspots around the world, bringing young people together to foster social cohesion. At Gatumba, today, seven thousand local boys and girls from both sides of the frontier mix together at this social and cultural centre, sharing their cultures and beliefs and playing together, having fun. Other centres have been set up in the Gaza Strip, Haiti, Ukraine and Tajikistan.

Another one of these initiatives is the leadership camp which began yesterday in Doha, Qatar, which brings together young people from nine countries in Sub-Saharan Africa and those from the occupied Palestinian territory, the objective being empowerment of young people through sport.

The young people, 18 women and 12 men, will be together or ten days and will participate in themes such as health, gender, disability, education and peace. The participants are from South Africa, Kenya, Zambia, Zimbabwe, Uganda, Ghana, Burundi, Tanzania, Namibia, the occupied Palestinian territory and from the host country, Qatar.

The hope is that young leaders who have had contact with other young people, from communities which had formerly been foes, or from other communities, will be better placed to lead the youth forward away from hatred and violence and into relationships based upon tolerance and mutual understanding.

Wilfried Lemke explains: "[The camp] provides concrete and practical leadership skills from some of the best leaders and experts in the field, in a truly collaborative spirit. This ensures that the lessons learned will guide these young leaders in their future endeavours".

The participants are aged between 18 and 25 and are chosen from among those who have already been involved in producing change through projects which have made significant
contributions to their communities. At the camp they will work together to produce action plans that can be set up where they live.

Excellent projects, and ones which can only be successful if young people, and especially young women, are empowered to be the leaders of tomorrow. The leaders of today, for sure, have in general (particularly western ones) failed miserably in creating a world where we can live our short lives on this planet in peace and harmony, learning together and respecting difference, rather than feeling threatened by it.

It is a pity the United Nations Organization is not more adept at avoiding conflict among adults and at making the rules of its resolutions, conventions, charters and covenants apply equally to all. But then again that really is not the fault of the UNO, but rather its members, is it not?