Chavez: Uribe wanted to transform Colombia into the Israel of South America 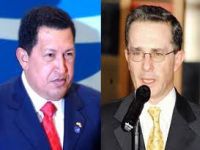 Venezuelan President, Hugo Chavez, asserted that the former president of Colombia, Alvaro Uribe, (2002-2010) planned to "make Colombia into the Israel of South America."

According to Chávez, the Uribe administration distanced his country from other nations in the region, "He nearly caused a war with Ecuador and broke relations with Venezuela, and neighboring countries."

The head of state said, through telephone contact with a state-owned broadcasting station, he has not verified information about a recording that was revealed on Thursday in a meeting where Uribe would have instructed a Venezuelan opposition group to reject the approach that Bogota and Caracas have been promoting lately.

Chavez also assured that the relationship between nations will not deteriorate despite the efforts made ​​by sectors of the Colombian and Venezuelan ultra-right to "sabotage" this approach.

"I am confident that relations between Colombia and Venezuela will continue recovering from the severe damage that was done during the previous government," Chavez said, adding that "fortunately the current government took another direction."

Since taking over as president of Colombia, in August 2010, Juan Manuel Santos has been promoting the deepening of relations between countries, having met with the Venezuelan president several times.

Chavez confirmed that that he will receive Santos on the occasion of next week's Foundation Summit of Latin American and Caribbean States (Cúpula Fundacional dos Estados Latino-Americanos e Caribenhos--CELAC), which will take place on the 2nd and 3rd of December, for a bilateral meeting.