Why Wahhabism still allowed in Russia? 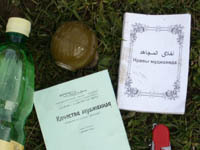 Russian mufti Farid Salman urged the Russian authorities to ban Wahhabism. This Muslim puritan movement was founded by Muhammad bin al-Wahhab in the 18th century in central Arabia. Nowadays, Wahhabism is considered a terrorist movement. Why hasn't Russia banned the movement yet? Who helped Saudi emissaries not to ban the movement in Russia? How could the Wahhabis conquer the minds of Russian Muslims? Pravda.Ru asked this and other questions to Roman Silantyev, a scientist on Islam.

"Legally, Wahhabism is not banned in Russia. If it is not banned then it means that it is legally allowed. There are several regional laws, but they can only be applied locally. They do not contradict to the federal legislation either. There were several attempts taken to ban the movement in Russia. It started in 1998 and became especially noticeable in 1999, when the Wahhabis became active in Dagestan. Afterwards, they started raising the issue of banning Wahhabism almost every year. The initiatives presumably came from the Office of the Prosecutor General. However, they were buried by Russian lobbyists of Wahhabism.

"The attempts to take the discussion of this issue to the law-making level failed. Opponents would say that Russia would ruin its ties with Saudi Arabia. Sheikh Ravil Gainutdin, then-chairman of the Council of Muftis of Russia was an ardent defender of Wahhabism. Many human rights activists, representatives of various Muslim organizations were also defending Wahhabism. They were saying that Wahhabist emissaries from Saudi Arabia would help the Russian Muslims revive.

"Unfortunately, many traditional Russian Muslims tend to take the side of Wahhabism too. Luckily, not all Russian Muslims treat the Wahhabis as "the good guys." Those Muslims are interested in something else. They wonder why Hizb ut-Tahrir (Party of Liberation) was recognized as an extremist organization in Russia even though its activists had not conducted any terrorist acts in the country. However, the Wahhabis committed a number of bloody terrorist acts in Russia, but their movement was not banned on the legal basis.

"The majority of Wahhabis refer to themselves as Salafists. Salafism is purely a Saudi movement. The followers of Hizb ut-Tahrir are not friends with Salafists. The supporters of Tablighi Jamaat are not on friendly terms with Wahhabis either, but their actions are pretty much identical. Therefore, there is nothing surprising about the fact that those Muslims who begin to explore the ideas of Salafism, may fall under the influence of Wahhabism.

"The founding father of Wahhabism, Muhammad Abdul Wahhab, and his followers, committed many crimes. They would kill Arab Muslims and demolish mosques. However, the actions of one and the same person can be interpreted differently. Let's take Stalin, for example. He is Russia's savior for some and a brutal tyrant for others. The same goes for the founder of Wahhabism. Some say that he was exterminating Muslims, whereas others say that he was conducting a fair struggle against heretics.

"The elite of Saudi Arabia are either direct or indirect descendants of Muhammad al-Wahhab. Needless to say that they will propagate their version of noble Wahhabism as the only true and acceptable version. They promote this version beyond the Arabian Peninsula, particularly in Russia. In Russia, people do not know much about the founder of Wahhabism.

"Activists of Wahhabism can be successful at the places, where the Muslim clergy do not have enough education. However, they can be successful in the places where the Muslim clergy have the highest level of education. Al-Azhar Islamic University in Cairo, Egypt, is often exposed to Wahhabist propaganda. As for Russia, the problem is different. It is rather difficult to become a professional Muslim theologist in Russia. It takes many years to become one.

"It is not about education. It is about the loss of authority. If a resident of a Muslim village confides in their imam, a hundred of Wahhabi preachers will not be able to convert such a person to Wahhabism. If there is no confidence, then even one preacher will be enough. The biggest problem here is the loss of authority of the traditional Muslim clergy in Russia and in the rest of the world in general.

"Wahhabi ideologists receive education in Saudi Arabia. First and foremost, it goes about the University of Madinah. They have schools in Qatar, Kuwait, Egypt, Syria and Jordan. These countries show resistance to Wahhabism, especially Syria and Jordan. The Arab spring has changed this state of affairs. The Egyptian Al-Azhar University, which was founded in the 10th century, can no longer be considered a stronghold of traditional Islam. Not so many places are left on the map of the world where people can obtain the knowledge of traditional, not Wahhabist Islam.

"One may not say that the Wahhabis have taken the Al-Azhar University under total control, but they own a part of it. Unfortunately, the situation has worsened considerably now, so one should not send any people there."