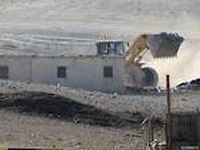 All the houses of the Bedouin village of Deqeiqa, south of Hebron, received the Military Order of demolition in a another example of the Israeli expulsion policy in the occupied West Bank, according to denouncements by human rights organizations.

This village, situated in the impoverished desert hills south of Hebron, is home to about 400 people who live on cattle raising and have no electricity or even no running water. In January, the Israeli army demolished 17 structures, including a classroom, precarious cowsheds and 12 households. Now another 75 structures, mostly homes, are also at risk of being knocked down.

According to Alon Cohen, of the Israeli NGO Bomkom, the problem with Deqeiqa is that this area "is located 650 meters from the green line, and the Israelis want to shift the population four kilometers north, to the town of Hameda." The measure is considered "impossible," due both to the lack of space and for cultural reasons, since the inhabitants of Hameda are another Bedouin tribe.

Yariv Mohar, spokesman for the Rabbis for Human Rights, believes that Israeli authorities "want to annex the south of Hebron so that it becomes a part of the Negev, because it is very close to the border and has few Palestinian inhabitants."

The argument of the Army is that Deqeiqa, outside of Israeli maps, is a mere "grouping of homes" and that it cannot be maintained as a community.

The spokesman for the Coordination of Government Activities in the Israeli Palestinian Territories (COGAT), Commander Gay Inbar, told the EFE agency that the Army "is still examining a number of alternatives to improve the standard of living of the villages" in this area, and said that "when they know the options, they will open a dialogue with tribal leaders."

However, residents of this town said that no officer came in contact with them, except for the demolition orders, and that they have been there living in these lands for more than a century and have nowhere to go.

Nayada Yousef, a local leader, said that "the Israelis build luxury homes in the settlements as they evict the Palestinians." On the transition to Hameda, the representative opposes it: "In Hameda, there's only one square meter remaining free. We have three thousand sheep and goats and 150 camels, we need space."

For Cohen, there is a "clear system of apartheid in the urban planning for Area C," nearly 60% of the West Bank, where Israel has administrative and security control, as established by the Oslo Accords.

Khalil Nayada, Deqeiqa resident and father of 12 children, said he felt anguished after he received the demolition orders for his three properties: a barn and two clay buildings.

Despite the difficulties, Nayada does not want to leave the land inhabited by their ancestors: "My grandfather was born in this town and died here in 1951."

Attorney, Sharon Avital, who appealed to the Supreme Court against 34 demolition orders issued in November said the court did not grant a preliminary verdict to halt the demolition before a decision comes out, so the homes could be demolished from Friday, he said.

Avital also does not see a solution for a Hameda forcible transfer, as suggested by the Israeli military, since "the Bedouins have their own homeland, their birthplace, which all the tribes recognize, and they cannot go to another town and take their lands. 'The families of Hameda will never allow it," he said.

"Israel does not make town development plans for the Bedouins, but yes for their settlements. The discrimination is so obvious that it cannot be ignored. "Also, they legalise the settlements retroactively and do not fulfil demolition orders for the settlements. When they want to, they do it, but it will not be the case in Deqeiqa," he concluded.