Chinese censorship cracks down on ancient profession of journalist 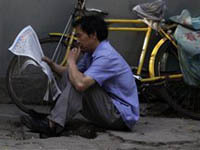 The main administration of Chinese media publicly announced that some "fake" media, journalists and news appeared in the country, which allegedly has an adverse impact on social harmony and stability. Earlier it became known that the Chinese Government is planning to toughen the censorship on the Internet after the official announcement that three people were punished "for spreading false rumors" online.

As reported by AFP, "illegal" and "fake" journalists per the Chinese government are those members of online media, who, according to the officials, are not qualified to work in the media. The statement of the Chinese press authorities also says that all legally operating Internet resources are required to tighten control over the flow of news in order to prevent the emergence and spreading of "fake" stories.

This means that the authorities officially banned journalists from basing their stories on unproven information. In addition, the Chinese police began detaining people who are accused of spreading rumors on the web. The press provides specific instances of such detentions.

For example, a university student was arrested for publishing a false report that a man in Yunnan Province killed as many as eight elderly villagers. The second person punished was a site editor who posted the information about a crash of a military aircraft not backed by the facts. The third journalist punished was a resident of Shanghai who posted a fake tax document online. In September, hundreds of people smashed a police station in southern China after the onset of the Internet rumors that the police in this area have killed a child.

The censorship in China existed before and now it is officially banned to publish unproven information. Perhaps, this can happen only in disciplined China. It is hard to imagine such authorities' behavior in Russia. At the mere mention of the word "censorship" on the Russian Internet the users would protest.

In fact, every blogger, every active user of forums is a journalist. After all, what we are writing in blogs and forums is accessible to all. It turns out that every blog or forum is a type of media.   There is no harm in it as long as the content is written in a human language. It is not hard to spread rumors on the Internet but it can be very difficult to take them back.

A young employee of one of the smaller media outlets the other day explained the approach he was recommended by his employer.

He was told that the point of the professional activities of journalists is not to provide Internet users with truthful, competent and reliable information but to attract as many readers as possible by headlines. The content can be anything, but the title has to be attractive.

This leaves a very bad aftertaste. Many times the Internet was used as septic tank carrying incriminating evidence and rumors into the masses. Compromising materials never benefited the public morality, quite the contrary. Fabricated news stories benefit neither the society no the journalists. The Chinese authorities may be right banning fiction and rumors in the Internet.

Incidentally, as recently as February of this year, the Chinese government demanded that foreign journalists do not show up in places where anti-government demonstrations are planned. China's semi-official English-language newspaper The Global Times in an editorial column accused the Western media of taking the anonymous calls for protests on the internet at face value.

In early December the Russian authorities will start monitoring the online media using special software. Not only texts but also pictures, audio and video, both editorial and posted by users, will be tested for compliance with Russian laws.

The software is to monitor the entire content (articles, commentaries, and media) of websites registered as mass media for presence of words, phrases and other labels from a list provided by the officials. The glossary of expressions and keywords, according to the specifications, should be filled up to five million records. However, it is possible that over time the main outcome of the total surveillance would be not the reprisals but intrusive service when the state databases fall into commercial structures.

In fact, Russia has long had a system where each Internet provider must install equipment allowing intelligence unimpeded access to the transmitted information.