Cuba suspects deceased leader of the ''Ladies in White" of diverting $20,000 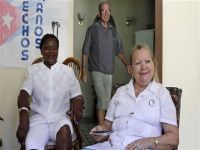 "Sticky Fingers" on the right

In Havana, rumors circulate at the speed of lightning. Sources close to the "Damas de Blanco" reveal that Berta Soler, the new head of that small group, had the bad surprise to note the disappearance of about $20,000 when taking over the accounts of the organization openly supported by the United States.

The founder of the "Ladies," Laura Pollan, died at age 63 on 14 October at the Calixto Garcia Hospital, a victim of cardiac arrest ''aggravated by a panel of diabetes, hypertension and dengue.''

The discovery of the group's missing finances came during a meeting which ratified Soler, 48, as ''head,'' of the group, who until the death of Pollan, acted as the number ''2''. There was a well known rivalry between the two women vying for favors from the Interests Section (USIS) of the the U.S. diplomatic mission in Havana.

The twenty or so women who constitute the "ladies" also confirmed in their posts their representatives abroad, Yolanda Huerga, United States, and Blanca Reyes, Castanon, Spain.

The "Ladies in White" are known abroad for two or three weekly walks in the vicinity of the Church of Santa Rita, in the neighborhood of Miramar, with gladiolas, as well as marches down Fifth Avenue in the same manner as those in Havana.

These marches are commonly rewarded with $30 per participant. The heads have a separate budget allocation which is often subject to internal conflicts.

Funding made in USA

Berta Soler, a microbiology technician, based in Alamar, left her job in 2009 at a hospital in Havana, to devote herself full time to better complete her renumerated opposition tasks.

The organization is tiny by the number of its members, but important for the amount of funds it receives, through intermediaries, on behalf of the U.S. government.

One of the official sponsors of the "Ladies," funded by Washington expressly for this purpose, is a U.S. Army veteran, Orlando Gutiérrez Boronat, who handles the Cuban Democratic Directorate, an NGO that receives significant grants from USAID funds for subversion in Cuba. Gutiérrez Boronat is also a former member of the terrorist organization for the Liberation of Cuba.

As did the terrorist Luis Posada Carriles, Gutiérrez Boronat maintains relationships with extremists of the right-wing ARENA party of El Salvador.

Money destined for the "Ladies" and other opposition elements in the network formed by the USIS had been frozen in Washington a few months ago following several scandals of fraud uncovered by the Federal Audit Office (GAO) in which well-known figures of the Cuban-American mafia were involved.

A weak and divided opposition

The former head of the SINA, Jonathan Farrar, became famous, inadvertently, from a "Wikileaks" document dated April 15, 2009, which commented that the so-called dissidents in Cuba are "divided, dominated by individualists who work badly as a team, characters who are more interested in asking for money than to developing programs." It was promptly revoked by the State Department with a release to the press. This statement enraged the anti-Castro mafia ''network'' of Miami.

On May 19, 2008, Cuban authorities publicly denounced during a press conference in which there were emails, videos and even cash receipts, that the "Ladies in White" and other so-called ''Cuban dissidents" received "substantial sums'' of money from the Cuban-American, Santiago Alvarez, a confessed terrorist.

The evidence presented directly involved the then head of the U.S. Interests Section (USIS) in Havana, Michael Parmly, who acted as a ''mule'' in the case. Receipts of money involved $2,400 sent directly to the now deceased Laura Pollan.