Pasta is not Italian. It is Libyan! 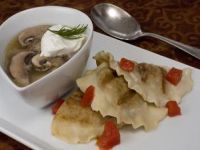 We celebrate World Pasta Day by having a look at the origin of Pasta and - seeing this is a Russian newspaper - finding out whether there are any Russian pasta dishes. Why not celebrate tonight by surprising your other half with an easy-to-cook Russian pasta meal for dinner? It's light and it's healthy! By the way - pasta is Libyan!

Pasta, from the Greek "pasta" (porridge of barley) or "pastós" (salted) and the Latin "pasta" (dough) has been around for a long time and probably originated as "lagana", referred to in pre-Christian Roman times as a fine, rolled sheet of dough, made of flour and egg, which was rolled and fried in olive oil, providing a good source of energy.

Different dishes developed over the centuries and have been documented all over the Roman world, some being the seasoned sheets of dough served with spices, others being more elaborate and involving different layers with filling in between them. The Arabic dish called "al-itriyya", semolina strips dried before cooking to as to preserve them may be the forerunner of our modern-day pasta and is certainly the ancestor of the Portuguese dish "aletria", a sweet dish made with string-like dried paste, milk and sugar - and the "trie" in Italy, the early forms of the pasta strips "tagliatelle".

"Itriyya" was an intelligent form of preserving food for long journeys and became popular among the Arab explorers and what is today described officially as pasta, namely dried durum wheat and egg, originated not from the Italian mainland, but rather Sicily, where it was introduced by the Libyan Arabs in the seventh century.

So Pasta is not Italian at all. It is Libyan!

Pasta is present in a number of famous Russian dishes, in the form of pelmeni (other variants Vereniki, Pyrogy, Koldunai, Krepla or Manti) which is a packet of dough filled with meat or vegetable fillings, spiced or not (a form of ravioli).

How to make Russian pasta

The dough is easy to make and can be frozen fresh so as to provide a basis for a quick evening meal. Basically you need two times gram flour to water (cold). To bind it you need egg and to season, salt. So, for 100 ml of water, you need 200 grammes of flour and one small egg. Just put the flour in a bowl, add the salt and egg and mix, add the water slowly until you have a firm and smooth dough which takes the sticky bits off your hands which you knead into a ball.

Before you make the parcels of pasta you need to make the filling. There are numerous variations, ranging from potatoes, mushrooms, cabbage, sour cabbage, cottage cheese, fish, meat or any combination. A common filling is ground beef and pork (50-50%) with a chopped onion, salt, pepper and spices (to taste). Paprika is common, so is dill. Mix all thoroughly in a bowl and it is ready to fill the parcels.

Cut your pasta ball in half, and roll one half out into a snake-like tubular shape. Wrap the other half, if you don't need it, in cling film and freeze it). Cut it off at 2.5 centimeter (1 inch) intervals and roll these out into discs on a floured surface. Place a teaspoon of the filling in the middle of each disc, folding the envelope over and pinching the edges well to seal the "pelmen", being careful not to break the surface.

Boil in plenty of salted water until they float and then boil for 4 minutes more. The can be served as they are, with soured cream (or double cream) or else in a tomato-based sauce with spices.