The alleged Hitler's life in Argentina after 1945 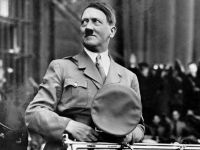 Two British authors claim that the Nazi dictator fled to South America, where he lived until 1962.  Adolf Hitler committed suicide on April 30, 1945 in his bunker in Berlin. Eva Braun, his wife, also did not kill herself after ingesting a dose of cyanide.

The Nazi dictator and his companion escaped in a submarine to the coast of Argentina. They lived for years on the outskirts of San Carlos de Bariloche, where they had two daughters before the death of Hitler in 1962. The Fuhrer was 73.

This is the controversial thesis of a book published in the UK, Grey Wolf: The Escape of Adolf Hitler, the British authors are Gerrard Williams and Simon Dunstan.

Specialist in World War II and historian Williams is said to have found sufficient evidence for co-writing the book.

Argentina was the ideal country, the authors argue, because this country was "a fascist and pro-Nazi enclave." Adolf Eichmann and Joseph Mengele, two notorious Nazi war criminals, also took refuge in Argentina.

Hitler and Braun, Dunstan and Williams argue, would have been aided in their flight by security services in North America. In return, the spies had access to the cutting-edge war technology of the Nazis.  There was pressure for the book not to be published. According to the authors of Grey Wolf, two of its eyewitnesses have been threatened with death when the work was being written.

The book cites numerous sources, including doctors and cooks. All say they have seen or known the Nazi leader before his death on February 13, 1962. His two daughters were still living.

However, this is not the first time that a book tells of the supposed escape of Hitler and Braun to Argentina. In 2003, Argentina published the work of Abel Basti on the Hitler escape to Argentina topic.

Now, however, the story will gain momentum with a new film based on Grey Wolf.

(Ed. Since this seems to be a day of wild, wacky stories)