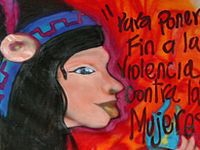 The UN Women's Fund for Gender Equality launches proposals for Women's Empowerment in Arab States. Perhaps everyone could take a page out of Muammar Gaddafi's book in Libya, where women have been given total conditions to foster their careers without regard to gender-based impediments.

Muammar al-Qathafi's record in Libya in terms of human rights and women's rights is superb, so much so that he was to receive a prize from the UNO this March (2011). Susan Lindauer, ex-CIA, states the following:

"Gaddafi has a very strong record on women's rights: Women have the right to education, hold property, divorce, hold jobs, have income--many rights that other women in the Arab world do not have.  So he is a moderate.  And he is not involved in any terrorism at all.  That [rumor] is absolutely foolishness". (1)

The Fund has set aside USD 16 million for its 2011-2012 grant-making cycle, with USD 4 million projected for grants in the Arab States and more if contributions during this grant-making cycle increase. Grants will start at USD 200,000 for initiatives that make tangible improvements in the lives of women and girls. The Fund will accept proposals from Algeria, Bahrain, Egypt, Iraq, Jordan, Kuwait, Lebanon, Libya, Morocco, the occupied Palestinian territory, Oman, Qatar, Saudi Arabia, Syria, Tunisia, United Arab Emirates and Yemen. Applicants may download the Call for Proposals and Grant Application at http://www.unwomen.org/fge/application-guidelines/. The first set of grants will be announced in December 2011.