The space police of Baikonur 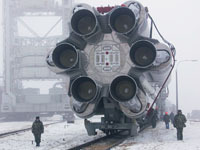 Not everyone knows that Moscow region police is guarding the Baikonur Cosmodrome. Baikonur, also called "a piece of Moscow in the Kazakh steppe" is the Russian city of federal significance. The work of the police in Baikonur has a distinctive character because the city is considered a sensitive site.

The "space police" does not employ special agents, but rather, ordinary people. The story of the Interior department at the Baikonur is inextricably linked to the history of Baikonur. According to the memoirs of Major-General of the Internal Service Oleg Morozov, deputy chief of the eighth Main Department of the Interior Ministry of the USSR in 1966-1983, the great designer of space rocket technology Sergei Korolev liked to call the  Interior Ministry serving the spaceport "police guards."

The Baikonur has not lost its importance and relevance to Russia as a space power cosmodrome after Russia and Kazakhstan became divided by a frontier.

The Russian Federation and the Republic of Kazakhstan in the mid-1990s signed several agreements. One of them, signed on December 25, 1995, had to do with the status of the city of Baikonur, municipal executive authorities and law enforcement agencies.

Even those who have never been there know that Baikonur is a closed city. It could not have been any other way in the space industry. Both the launching pads and homes are under police control. The entry and exit to and from the city of Baikonur is carefully watched by law enforcers. This is especially true when foreign delegations visit the city.

Before going into space, astronauts speak to reporters. For the police an assembly of journalists is a zone of special attention. It can easily lurk dangerous criminals. "Space police" guard the life of astronauts as they try on spacesuits and on the way to the launch pad.

Space travel would have been impossible without technical experts. Their lives and health is the object of attention of the Baikonur police. Space industry experts are guarded almost as much as the astronauts.

By their very nature, the Baikonur police are not a usual unit. This is a squadron of special designation. In principle, it is logical, since the rank of space police assumes it. It is evident that the service of a Baikonur policeman is akin to   service in the KGB. However, the staff is supervised not by the FSB and the GRU but the police of Moscow region.

The police of Moscow region told Pravda.ru how workers are selected for the "space police". "The selection of candidates to serve in the Office of the Russian Interior Ministry at the Baikonur complex has been held in accordance with the requirements of the Police Act. During the selection process particular attention is drawn to the moral and professional qualities of the candidate, professional fitness, educational and cultural level, state of health and physical fitness. Candidates are recruited both from Russian citizens residing in the city of Baikonur and those who were transferred from Russia.

Employees of internal affairs serving at the Baikonur are paid salaries for the positions held and additional salary for the rank. A monthly premium is paid for the implementation of space programs. Years of service are calculated at the rate of one month of service for two.

All out-of-town residents are provided with service housing. However, the employees can keep their accommodation only for the period of service on the Baikonur," explained Eugene Gildeev, Head of Information Department of Internal Affairs of Moscow region. Gildeev added that any employee of MIA that has been certified can become a "space policeman".

"As in all departments of Internal Affairs, the employees of the Office of the Russian Interior Ministry at the Baikonur that meet a number of requirements, such as level of education,  experience, have positive references and also know how to properly organize their work and the work of subordinate employees are appointed to more senior positions," the expert told Pravda.ru.   The "space police," despite its special status, is still the police. Its main task is to fight crime. Particularly, considering that Baikonur is a city of federal significance, i.e., "counterpart" of Moscow and St. Petersburg.

In contrast to the two capitals, Baikonur is one of the least criminalized cities. This has always been the case. Entry and exit of each person to and from the city was closely monitored. As for the residents, a space industry engineer or an astronaut can hardly be a robber or a rapist.

The situation changed after the Soviet Union collapsed. While Russia and Kazakhstan were determining the status of the Baikonur, the crime has grown. More precisely, it came from the nearby settlements of Kyzyl-Orda region. In 1990s nearly all of Kazakhstan lived below the poverty line. The industry and social services were in ruins, police was corroded with corruption. The cases of theft, robbery, rapes and murders have become more frequent. In terms of child neglect Baikonur made it to the top ten not only in Kazakhstan but also in Russia.

When the status of the city was designated, the leased Baikonur was monitored by two Interior Ministries, two prosecutors' offices and two state security organs. But social problems have not disappeared. Engineers and astronauts are not the only ones who live in the city. Baikonur hosts a great deal of people who have local residence papers, including the indigenous Kazakhs. They cannot work on Baikonur objects because mostly Russians are hired to work there. If the Kazakhs are lucky enough to be hired, they are paid far less than the Russians.

In June of this year mass uprisings occurred in Baikonur. A crowd of youths pelted a police patrol car with stones and bottles. Vladimir Nekhoroshev, deputy of the lower house of the Parliament of Kazakhstan, called it "the first call for the Kazakh and Russian authorities." "This is not the first time it happened. We must deal not only with the launch of missiles but also comprehensively address the problem of the city," the politician said in an interview with the Kazakh media.

The Baikonur "space police" is used to distancing itself from the politics. As usually, it guards the facilities, engineers, and astronauts, and monitors the city life. Crime-solving rate in the city is approximately 70 percent. Murders and rapes are fairly rare. A major headache for Kazakhstan is the intensification of radical Islamists. Activists of Hizb-ut-Tahrir, Tablighi Jamaat, and Al Wahhabi entered the Kyzyl-Orda region. The Baikonur police reported to Pravda.ru that Islamic radicals recruit the disadvantaged unemployed and try to play the card of ethnic hatred. For them, the Russian city of Baikonur is a symbol of occupation. Yet, there have been no terrorist crimes in the city of Baikonur. This is largely due to the service of the "Space Police" that employs not supermen but ordinary Russian guys.