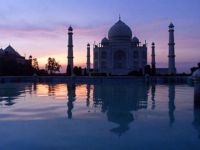 The structure is 358 years old and the building is deteriorated. It attracts 4 million visitors every year, and now presents cracks...

The iconic Taj Mahal, an Indian monument, is in danger of collapse if the problem with its deteriorating foundation, composed of wood, is not resolved. The Monument is the mausoleum of an Indian Emperor's wife.

The Emperor was Mughal Emperor Shah Jahan in memory of his third wife, Mumtaz Mahal. She was his constant companion and trusted confidante, and their relationship was intense.

Mumtaz died in in 1631 AD (1040 AH), while giving birth to their fourteenth child. She had been accompanying her husband while he was fighting a campaign.

The structure is 358 years old and is located in the city of Agra. The Taj Mahal is the most famous landmark of the country, attracting 4 million visitors every year.

According to the British newspaper Daily Mail, activists fighting for the preservation of the monument believe that its foundation is fragile despite its surviving over the centuries. The evidence of problems in the structure are visible on its walls, which presented cracks last year. The monument is near a highly polluted river and the foundation could be rotting due to lack of water.

"This is something that those who built the monument could not have anticipated," said a professor. "The river is part of the architecture of the Taj Mahal. If it dies, the monument will not be able to survive."

The Taj Mahal is one of hundreds of monuments that the World Monuments Fund lists as threatened every two years since 1996. The list this year, released on Wednesday, said 67 cultural heritage sites undergo preservation problems. Latin America is the leading region for assets that are in danger of destruction, including the Salvador historical center.

In addition to Salvador in Latin America, the Linhas de Nazca in Peru, in the city of La Plata, Argentina, and Forte de Samaipata, in Santa Cruz, Bolivia were listed .

Out of a total of 226 nominations submitted by governments, experts and NGOs linked to the preservation of cultural heritage, the WMF report listed a total of 67 sites in 41 different countries.

This total includes archaeological sites dating from the fourth millennium BC in Jordan and Turkmenistan up to relatively modern buildings, such as "British brutalist architecture" of 1960 and 1970, or the Route of Friendship in Mexico City, designed for the 1968 Olympic Games.

The WMF selects the places at risk considering the effects of nature's power and the impact of social, economic and political changes surrounding them.

Latin America and the Caribbean, with 22 places, head the 2012 report at the regional level, followed by Asia, 14 places; Europe, 11, and the Middle East and North Africa 7.

"This year we had an unprecedented number of nominations in Latin America," said Erica Avrani, director of research and education of the WMF at a news conference.

On the list are places in Argentina, Belize, Bolivia, Brazil, Colombia, Cuba, Guatemala, Haiti, Mexico, Panama, Peru and the Dominican Republic. Since 1996, WMF has included 686 places in 132 countries and provided $90 million for the preservation of threatened sites.