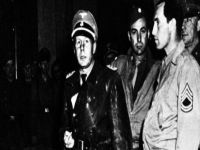 The West German secret service (BND) used a Nazi criminal, Walter Rauff, who between 1958 and 1962 then lived in Chile, to spy on the Cuban leader, Fidel Castro, said the magazine Der Spiegel on Sunday

Rauff, who after the fall of the Third Reich escaped from an allied prison camp to Syria, first, and then to Latin America, was contacted when he was in Chile by another ex-Nazi, then a BND agent to provide information about Fidel.

West German espionage through its emissary was perfectly aware of the role played by Rauff during Nazism, as the coordinator in charge of mobile gas chamber units, developed by himself.

Rauff directed a special unit of the SS, which had more than 20 trucks equipped with chambers 1.7 meters wide and six meters in length, which were connected by a hose to the exhaust pipe of a vehicle so that the prisoners died of gas inhalation. These chambers were used in concentration camps near Berlin, in occupied Poland and in Ukraine, details the magazine.

Nevertheless, the BND was in contact with the Nazi war criminal, with the mandate to provide intelligence services about Fidel Castro. In exchange for services, Rauff received DM 70,000 and was warned in time by BND to destroy all documents when police arrested him in 1962 in Punta Arenas.

Der Spiegel got this information from recently declassified documents from the BND. Rauff was captured by American troops in 1945, but escaped from an Italian prison camp a year later and, after a sojourn in Syria and later in Ecuador, arrived in Chile in the mid 50s, where he settled as a businessman in Punta Arenas.

In 1962, he was arrested and was judged by a request from German justice, that accused him of the murder 98,000 prisoners under the Nazis. The suit was eventually dropped because the Chilean courts found that the crimes had expired the statute of limitations of 15 years. He died in 1984 in Chile, where he spent the last 26 years of his life, some of them protected by the regime of Augusto Pinochet