Palestine, to a great moral victory 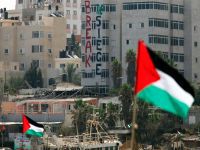 The date approaches in which Palestinians will receive in the General Assembly of the UN the recognition they deserve as an independent and sovereign member of the organization with more than two-thirds of the votes: no less than 130 and probably between 140 and 150 of the 193 countries that comprise it.

Knowing that this outcome is inevitable, Obama and Mrs. Clinton have been done all in their power to deter the Palestinian National Authority (PNA) to present the proposal, including the threat of a veto if the subject moved to the Security Council.

But senior U.S. officials admit privately that the White House wants to "avoid campaigning for the veto because it could just leave the United States alone in the attempt." In any case, the superpower and its Zionist godson will be in a position of inescapable international isolation when the topic is discussed at the General Assembly.

There was a very graphic cable sent to Tel Aviv by Ron Prosor, Israel's ambassador to the UN: "The most we can hope to achieve is a group of States that will abstain or be absent during the vote. Only a few countries will vote against the Palestinian initiative," he adds.

The Palestinian National Authority (PNA) has realized that their only alternative was to bring this matter to the General Assembly, but they have made it clear that they are not leaving the negotiations sponsored by the Quartet (U.S., EU, Russia and the UN). And the fact is that 17 years after the Oslo accords, the Palestinian Authority has not achieved a single success from Zionism at the negotiating table.

Instead, their territory is still occupied by Israel, which fails to comply with the obligations of an occupying power, continues to steadily increase illegal construction of Jewish settlements in the West Bank to the extent that the remaining eroded Palestinian territory before the 1967 war are just shreds. Israel holds thousands of Palestinians, including children and women, in their prisons for demanding the rights of their people.

Not to mention the genocidal blockade of Gaza, punitive operations such as the Nazi-like "Cast Lead" and the murder, abuse and waste of assets of which the targets are children, women, elders - all Palestinian civilians - by Israeli armed forces in a waste of the most modern military technology provided freely by the United States to be used against a defenseless population.

It is a bad joke at this point that Obama was quick to circulate a draft for the umpteenth time that Israelis and Palestinians should sit down to talk to prevent the Palestinian Authority from presenting the proposal to the General Assembly to recognize a Palestinian state.

Only someone alienated would not realize that Israel has been playing around so far, so the resolutions on Palestine are necessary. They pretend to negotiate peace while deepening and extending their colonial policy and aggression against the Arab peoples.

This continues to happen thanks to Washington's unconditional support. This includes, of course, the use of an undemocratic veto in the Security Council to prevent the slightest action against the Zionist entity.

In nothing the upcoming vote in the General Assembly will not change the bitter situation of the Palestinian people, but the claim will mean that in this body the Palestinian right to self-determination, also the Palestinian Authority will have greater access to UN bodies and the right to bring issues before the International Court in The Hague. It will also be a moral victory and a well-deserved recognition for one of the most exemplary and tenacious peoples in the struggle for national liberation.

But the winds do not blow in favor of Washington and Tel Aviv in the Middle East, nor of its peoples, as demonstrated in the Arab rebellions. Israel no longer has a faithful ally as in the times of Egypt and Mubarak. Having a friend in Ankara is finished, no more friendship, which has all but severed relations with Tel Aviv because of, among other reasons, the murder of its citizens in the Freedom Flotilla and the arrogance of Netanyahu.

Latin America, for its part, will demonstrate in the General Assembly vote the degree of its independence from Washington's foreign policy to which the vast majority of its countries have come. Only Colombia has announced its vote against. We are still waiting for Mexico, which has not revealed its position.