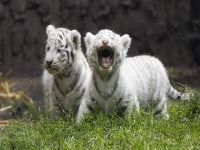 Once upon a time there was a brave Korean Tiger who was valiant and proud and stood for what was right, defending the forest from evil beasts, upholding the Law of Civilization against the Law of the Jungle. In the same forest was a snivelling little coward who looked the other way and hid in a deep hole, shivering, when there was a fight.

The brave Great Korean Tiger was the result of the legend which formed the Korean People, cousins of the great Mongols, having won the fight with the bear in a cave. From that cave emerged the proud tiger, intelligent and civilised, who vowed to stand up for his people and to defend the laws which he had inherited as King of the Jungle. These were the Laws of Civilization.

In his Jungle, he was looked up to by all the animals to maintain peace through a proper convening of the Council, where there were five permanent members, the most powerful five animals which had learned how to use a resin which grew on the Bomb Tree to murder millions and millions of other animals. Only one of them had actually used it, twice.

The less powerful animals lived in fear of these five, but in respect also because two of them at least, stood for the Laws of Civilization, while the other three (the other animals called them FUKUS) stood for the Law of the Jungle, under which members of the Jungle could dismember each other, gang together and slaughter other animals because they coveted the areas where they lived.

The Great Korean Tiger was supposed to convene the Council whenever there was a conflict, and use it as a means of discussing the problem and managing the crisis. The five permanent members could use the veto to block any aggressive moves by other members but as time went on, it became clear that the Council was used not to defend the Law of Civilization, but rather as a means to trade interests among the Five.

The Korean Tiger, however, was supposed to use his intelligence and greatness to solve crises, even in such a climate.

There was another tiger in the forest and all the animals laughed at it. It was called the Yellow Bellied Tiger because it was afraid of its own shadow and used to scream and run when it saw an ant. The other animals used to bang coconuts together and say BAN! BAN! and laugh as it scampered away with its tail between its legs and hid, trembling.

One day the same group, the FUKUS Three, decided to gang together and invade the lands occupied by Brother Muammar, peaceful and rich lands with a plentiful supply of food. The Council meeting resulted in the usual trading of interests and the FUKUS send in hundreds of chimpanzees and other monkeys bearing arms. Brother Muammar fought back valiantly but for some reason all the other animals in the Jungle called on him to step down and allow these marauding frenzied apes to steal his resources from him. Even as he fought they were meeting and deciding among them what they would take.

This all happened when the Korean Tiger was away. Since the Yellow Bellied Tiger was the only other one in the forest, the good animals which stood for the Law of Civilization looked to him to see if he would become a Great Korean Tiger.