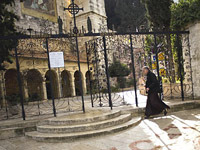 In the Old Testament, sometimes, when God would make pronouncements to Israel, He would refer to Israel as "Earth" (Isaiah 1:2). The word "earth" in the passage of 2 Peter 3:10 symbolizes national Israel and Judaism, and the word "elements," in the passage, represent the ceremonial beliefs and tenets of Judaism. The Apostle Paul uses the same word "elements" in the Greek to refer to religious beliefs and principles (Colossians 2:20). The "heavens" represent God's relationship to Judaism. All this will be permanently done away with upon Christ's return accompanying the destruction of the Jewish Temple and Jerusalem (which occurred in 70 A.D.)

The Old Jerusalem, representing Judaism, is over permanently and replaced by the New Jerusalem (Christian Church). But, isn't the Book of Revelation supposed to be interpreted literally. No. Jesus Himself said not to interpret Revelation literally.

In the very first verse of the very first chapter we read, "The revelation of Jesus Christ, which God (the Father) gave unto Him, to show unto His servants things which must shortly come to pass; and He sent and signified it by His angel unto His servant John" (Revelation 1:1, KJV). The word "signified" in the passage comes from a Greek word meaning "signs" or "symbols." Thus, Revelation was meant by Christ to be interpreted symbolically, not literally. And notice, the passage says that these things "must shortly come to pass," (not thousands of years later).

We read in the Book of Joshua 21:43, 45: "And the Lord gave unto Israel all the land which He swore to give unto their fathers; and they possessed it, and dwelt therein. There failed not ought of any good thing which the Lord had spoken unto the house of Israel; all came to pass." Thus, there is no promise concerning the land that still awaits any fulfillment.

The promise of the land to national Israel was conditional, so long as they obeyed God (Deuteronomy 28). The ultimate disobedience of the Jewish religious leaders was when they crucified Christ, and Christ Himself said that, as a result, the nation would be judged. There was no more promise to fulfill concerning the land because of their disobedience. Individual elect Jews will be saved just as individual elect Gentiles.

Ultimately, it God the Father who killed His Son for our sins, but he used evil instruments, who did it freely, and they were, in turn, judged for what they did. The 70 A.D. destruction of Jerusalem was total. Even the Temple genealogies were destroyed, unlike when Jerusalem was destroyed centuries ago, previously, by the Babylonians.

Most evangelical Christians wrongly believe that the "Great City" in the Book of Revelation, which God destroys in His wrath and which is referred to figuratively as "Babylon," is Rome. They believe it is Rome because the city is described as being surrounded by seven hills.

However, Jerusalem, also, is surrounded by seven hills. The proof that Jerusalem is the city and not Rome is found in Revelation 11:8 where we read, "And their dead bodies shall lie in the street of the Great City, which spiritually is called Sodom and Egypt, where also our Lord was crucified".

Jesus said that every eye will see Him at His return (that is everyone in Jerusalem at the time of its destruction) will know that Jesus was ultimately behind Jerusalem's judgment and destruction for its ultimate rejection of Him as Messiah. The word "see" in the passage comes from the Greek word "eido" which can also mean "see" in the sense of understanding or comprehending like when you say to someone "Do you 'see' what I mean?"

In the Old Testament when Babylon was destroyed the Scripture says that the stars of heaven fell and the Sun and moon turned their color. This is known as apocalyptic language in Scripture. Whenever a very major event affecting Israel happens such language is used. The Book of Revelation uses similar language also. Revelation is to be interpreted symbolically, for the most part.

To read the full article by the author, please google search the title: SECOND COMING OF CHRIST MISUNDERSTOOD.

The author, Babu G. Ranganathan, has his bachelor's degree with concentrations in theology and biology and has been recognized for his writings on religion and science in the 24th edition of Marquis' "Who's Who In The East." The author's articles may be accessed at www.religionscience.com