The world is full of revolutions 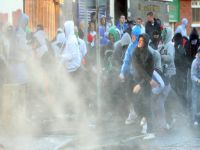 Central banks perform desperate moves, trying to avoid the collapse of major companies, dragging the entire economy into the hole of 1929. Investors take refuge in assets less insecure. Credit is scarce and costly. Productive investments are postponed indefinitely. It is no longer debated whether there will be an economic slowdown in the immediate future, only the magnitude of this decline.

Some even compare our current situation to the passengers of the Titanic soon after the collision with the iceberg, the ship is sinking, but we don't realize it.

Why is there this tsunami that devastates the world economy, after years of significant growth?

The experts concluded that the central banks of developed nations colluded with amazing operations, exceeding real assets in such a way that the collapse of the house of cards was simply a matter of time.

But does it all come down to mere negligence of the authorities who should have avoided the transformation of financial markets into a casino?

The alternating economic phases of boom and bust have marked capitalism since its inception. Why should this time be different? Where did the learned economists get the idea that growth will be continuous? This seems more an expression of desire than unbiased analysis.

According to Marx, the original sin of capitalism is the surplus value, that employees do not receive back the total value of goods they produce, and are prevented from buying them all, hence the mismatch between the supply of products offered and the purchasing power of consumers.

Until the middle of last century, this rebalancing took dramatic forms: from the burning of coffee to avoid the international price of the product falling (distributing it to the poor was not an option) until the war, which generated a captive market for surplus production in the form of weapons.

With the advent of nuclear weapons, however, conflicts between powers now have the minor inconvenience of being able to extinguish the human species. So, since 1962, the year of the Cuban missile crisis, such situations have to be managed more carefully. The Giants never again faced each other, beginning not to intervene when one of them beat a midget in their sphere of influence.

Inequality, however, continued to characterize capitalism, with the aggravating circumstance that the formidable scientific and technological advances of the last two decades have created perfect conditions to provide every inhabitant of the planet enough for a dignified existence.

Instead, what happened was an increase ad absurdum of parasitic activity, completely useless for humans, whose most conspicuous expression is, of course, the banks, lords and masters of contemporary capitalism.

And so that goods and services continue to be consumed regardless of insufficient consumer purchasing power, they also expanded the credit supply ad absurdum. So, now nations to families operate with the most foolish credit accounts. They never close the accounts or the debts, they are always pushed into the future.

It's on this backdrop of artificiality that large speculators in financial markets projects had their field of action greatly enhanced by the advent of the Internet.

To attribute to them (or to the authorities that didn't police them sufficiently) the responsibility for the recession is so fallacious as now, e.g., in the stock market crash in 1929. The name of the villain was always different: capitalism.

The cultural industry, now totally in the service of the powerful, instills in its audiences the notion that the present reality is the only one possible and the only options offered are within the system.

But we are, instead, paying for the ills of capitalism. It becomes more harmful as it increases potential (criminally wasted!) for we will build an egalitarian and free society in which no one is limited by necd.

Perhaps the stimulus to differentiation and the pursuit of privilege has been instrumental in the past as a motivation for man to dominate nature and to reach the current capacity to generate wealth.

Today, however, we have everything we need. What troubles us is not the lack of resources, but its poor performance, with an obscene inequality condemning whole nations and population groups from other countries to subhuman existence, and the prevalence of private interests over the common good leading to senseless squandering of the finite resources of the planet.

We are receiving a warning that capitalism, with its intrinsic irrationality, becomes an increasingly destructive force directed against humanity that can inflict upon us both want and make the fury of nature weigh upon us

But there is no natural law or divine command that forces us to maintain the present course until the bitter end. It all depends on the will and conscience, hearts and minds. "Where men live, help can only come from men," said the great Brecht.

If any attentive reader has already happened to have read this text, congratulations! Word for word, it is the global Nightmare article. I wrote about the latest capitalist crisis in September 2008.

Again, the perspective is a recession, which is being imposed on country after country, and the ghost to haunt the world, that it will evolve into a global recession, and worse yet, a great depression.

Those like Delphin Nettos have the audacity to claim that Marxist economic theories have expired! Instead, they are more alive than ever. As I said in 2008, we are seeing the old cyclical crises of capitalism, in the 21st century version.

And as capitalism is now in an advanced stage of putrefaction, the interval between attacks is no longer than 10 years, as in Marx's time, but three. If the domino pieces have not been falling all this time, when will the next crisis be? Two years from now? A year? Six months?

The world is full of revolutions.

* Celso Lungaretta is a journalist and writer.