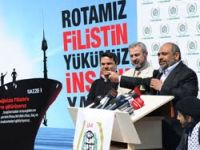 The Spanish activist group, scheduled to leave in the Freedom Flotilla II the third week of June, rejected the call made by the United Nations secretary general, Ban Ki-Moon, to discourage participation in this new advanced attempt at delivering humanitarian aid to the Gaza Strip.

The group "Sailing to Gaza" urged Ban to dedicate the focus of their actions to protect the Second Flotilla instead of asking for their limitation. They also called for pressure on Israel to desist from their siege on the Palestinian side.

"We firmly believe that the diplomatic efforts of Ban Ki-Moon must be directed to press Israel to break off and end the blockade of the Gaza Strip, considered illegal by the United Nations itself and that Israel be told to comply with international law in everything that refers to the occupation and subjugation of the Palestinian people," says the text of their message.

In this regard, "Sailing to Gaza," urged the United Nations to accompany the flotilla that seeks to break the iron tight Israeli blockade and transport humanitarian aid to the one and a half million people living in the Gaza Strip.

They also demand protection for the ten boats that will sail with about 1,500 activists on board, including teachers, artists, medical personnel and others in the third week of June, while not discouraging the activists to desist from their action.

The UN Secretary-General last week called on Israel to "act responsibly" and avoid engaging in violence in this new attempt to break the blockade, but urged the leaders in Spain, France, Italy, Greece, Turkey, Belgium, Holland, Ireland, Sweden and Germany to convince the pro-Palestinian organizations not to participate in Freedom Flotilla II.

Ban recommended that civic groups provide their support "through legitimate crossings and the established channels."

The Spanish group stressed in a statement that the expedition will attempt to break through the blockade for a humanitarian action, "peaceful, nonviolent, legal and consistent with international law and defense of human rights and international law."

"All these objectives are entirely consistent with the goals pursued by the United Nations. Therefore, we support that the legal and moral obligation of the organization is to give full support to the Second Freedom Flotilla," emphasizes the text.

The organization sailing to Gaza recalled the violence of a year ago, where the Israeli army attacked a humanitarian craft, the Mavi Marmara, where nine people were killed and fifty wounded. In the attack, the other 700 persons who participated in the expedition were kidnapped.

"For these reasons, we are compelled to publicly express our profound disagreement with the content of the letter sent Friday by Ban Ki-Moon to the governments mentioned above. The pressure exerted by the Secretary-General of the organization to our governments completely betrays the ideals and objectives of United Nations," the statement stressed.

The defenders argue that the situation in Gaza is "untenable" and therefore they encouraged Ban Ki-Moon "to make the appropriate steps to propose to the General Assembly and to the Security Council concrete sanctions on Israel that go beyond mere declarations."

Several civic groups from different countries have organized a new attempt to break the Israeli blockade on the Gaza Strip a year after the attack by the Israeli army against the Freedom Flotilla loaded with humanitarian aid for the Palestinian people.