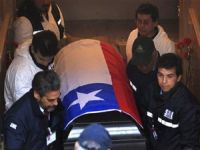 The remains of former Chilean President Salvador Allende (1970-1973) were exhumed today by a team of 23 experts in the country. Information is from the agency Lusa.

It is the first time that Chile's courts opened an inquiry into the circumstances surrounding the death of the former president - the last democratically elected head of state in the country before the military coup of 1973.

There are suspicions in Chilean society about the cause of death of Allende. Officially, the information that prevails is suicide, but this has produced much controversy. Allende died almost 38 years ago. The request to open an inquiry was made by Beatriz Pedrals, of the the Fiscal Justice Department, and the investigation will be led by the public prosecutor of Chile, Minister Mario Carroza.

Allende died on September 11, 1973 when the forces of General Augusto Pinochet stormed the government headquarters, the Palace of La Moneda, where the president was then. During the military coup, the information released about the death of Allende was that he killed himself with a shot. An official announcement declared that he had committed suicide with an automatic rifle.

Judge Carroza and experts from the Medical-Legal Service will coordinate the operation of exhuming the remains of Allende that are in the General Cemetery of Santiago. The action is being accompanied by relatives of the former president. Also participating are foreign experts, agents of the Investigative Police and the Carabineros (militarized police).

One of the associations representing victims of the dictatorship, as Allende's family, requested the exhumation. The case of the former president is among 726 cases involving victims of human rights violations during the military regime in Chile - 1973 to 1990. The dictatorship of former President Augusto Pinochet is considered by historians one of the most violent in Latin America.