CIA director claims that prisoners were subjected to the method known as waterboarding, considered a form of torture 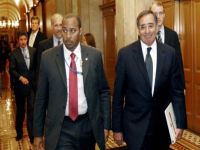 The Director of the Central Intelligence Agency, Leon Panetta, said on Tuesday that an interrogation method known as waterboarding (a form of torture that simulates drowning) was used with some of the prisoners who provided information that led to the discovery of the whereabouts of Osama bin Laden.

In an interview with U.S. network, NBC, Panetta was careful in answering questions about the use of waterboarding, saying repeatedly that the clues that led the U.S. to the hideout of the leader of Al Qaeda came from "multiple sources."

However, he admitted that some prisoners who have provided relevant information has been subjected to "coercive interrogation techniques." When the interviewer asked if one of these techniques was the method known as waterboarding, Panetta replied: "Correct."

Panetta added that "the debate over whether the U.S. could have obtained the same information otherwise will always be open."

Waterboarding is a procedure of tying a piece of cloth or plastic in the prisoner's mouth and then pouring water on his face. The prisoner quickly begins to inhale water, causing the sensation of drowning.

"President Obama made it very clear to the Pakistanis that if we had solid evidence of where bin Laden was located, we would enter Pakistani territory to catch him. And this is exactly what happened," said the CIA director.

The discovery that Osama bin Laden was hiding in the city of Abbottabad, about an hour from the capital of Pakistan, represents a devastating blow to the army and intelligence agencies in the country. After years of denying that the leader of al-Qaeda was on its territory, the Pakistani government now tries to preserve already fragile relations with the United States.

While the U.S. government has taken care not to directly accuse Pakistan of harboring bin Laden, the White House will demand answers about how the terrorist leader was able to live so long in the country - and in a fortress located near a military academy.

Even before the "death" of bin Laden, the tension between the U.S. and Pakistan was already growing. The Pakistani government has been pressing for a reduction in the number of American intelligence agents in the country and the dissemination of clear information about CIA activities on their territory.

For analysts, the "bargaining power" of Pakistan in this negotiation decreases considerably after the "death" of bin Laden. The American assessment is that the operation that tracked bin Laden makes clear the importance of secret CIA missions on Pakistani territory.