The truth about the myth of samurai 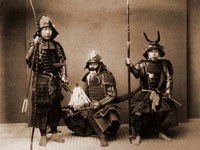 In mass consciousness the samurai are ideal warriors, as well as philosophers, poets and aesthetes. Were the representatives of the military class in Japan indeed like they are believed to be? And if not, where did the myth of the ideal samurai come from?

The image of the samurai, a warrior without fear and reproach, ready at any moment to sacrifice his life for his master, has long been very popular throughout the world. Interestingly enough, according to various polls, today the "samurai-mania" is mostly common in Europe and the United States and least of all in South-East Asia, including Japan itself. In the Land of the Rising Sun books and films about the samurai are rapidly losing their popularity, while the success of any work of art mentioning the representatives of the military class in Japan is guaranteed.

Why the samurai are so attractive for the contemporary people? First, it is the fact that, as stated above, the samurai without a doubt, any given second can sacrifice their lives for the sake of high ideals, including loyalty to their master. In addition, the samurai are a type of a people who prefer death to shame, self-service to the overlord is the highest award for them, and they look with scorn on other people concerned only with their own wealth.

Many also believe that the samurai are highly educated members of the medieval Japanese society, connoisseurs of all things beautiful, talented poets and masters of the tea ceremony. Finally, the samurai are considered experts in combat with swords, as well as true adepts of the "cult of the sword", and fencing is still one of the most spectacular martial arts.

All this makes the image of the samurai created by writers, producers and artists very attractive. However, when we give a word to historians, it appears that all these representations of the warriors of medieval Japan are absolutely not true (just like the idea of ​​nobility and chivalry of the European knights). Yet, what were the real Japanese samurai like?

To answer this question, we need to make a small digression into the history of Japan. For the first time this word appears in written records of the 7th-8th centuries, and stems from the verb "saburau" which means "serve." It is noteworthy that initially those who were called samurai were not warriors, because in those days Japan's army was drawn from the peasant-based recruit system only when needed, and in peacetime the military were representatives of the aristocracy to whom the word "saburau" was inapplicable. However, these "peacetime military" had multiple servants who they called samurai. In most cases, their responsibilities were just different kinds of work on the farm, as well as support of their master at various official functions.

However, even in the 9th century, when it became clear that the recruiting system was not working because the peasants tried to avoid the army no less than the current Russian youth, the country started creating professional military units. Particularly active this process was in the north of Honshu Island, where the Japanese were in a state of a chronic war with the "barbarians" (ancestors of the modern Ainu). These groups were formed primarily from the samurai. Slowly they became professional soldiers.

For the first time the samurai proved themselves as such during the war between the clans of Gempey Minamoto and Taira (12th century). After that no single strife and military conflict was solved without them. It is worth mentioning that until the middle of the 19th century when the samurai had ceased to exist as a class, these soldiers only once took part in repelling the external threat (the Mongol invasion in the 13th century), and even then the army of Kublai Khan was defeated by a sudden typhoon. Only once they participated in the outer expansion (the Korean War of the 16th century).

At first there was no clear distinction between the samurai and the representatives of other classes in Japan. Any interested person could join the "soldiers of fortune", including simple peasants. In the 15th century, these newcomers were called ashigaru (literally: "light feet"), and were armed only with bamboo spears. They were used mainly as cannon meat, so the lives of most ashigaru were very short. Those who managed to survive became the samurai, and one of them, a son of a woodcutter by birth, has managed to even become the de facto ruler of Japan. His name was Toyotomi Hideyoshi.

It was this man who made the first attempt to turn the samurai into a closed class. According to his order (the end of the 16th\ century) belonging to the military caste became hereditary. He forbade anyone but the samurai to carry weapons, violation was punishable by death. His successor Tokugawa Ieyasu completed the isolation of this class, giving the samurai various privileges. For example, they did not pay taxes, had the judicial authority and were the only ones assigned to all public offices. It happened in the very beginning of the 17th century.

It is interesting that at this time fractured Japan has finally united and all the wars in the country were over. Therefore, the samurai actually had no one to fight. It is surprising that in less than two decades of a peaceful life the military training of the professional soldiers has reduced to zero. The documents of the time are full of complaints from various daimyo (heads of provinces) and government officials that the subordinate samurai do not know how to handle weapons, do not know the basic rules of military art and are completely undisciplined.

It was at this time when, in order to prevent the rapid dilapidation of the military class, the myth of the samurai was created. The famous samurai code of honor "Bushido" came out based on literary works of D. Yudzana (1639-1730) and D. Yamamoto (1659-1719). Strictly speaking, these two authors were the first founders of the modern image of the "ideal Samurai," which was largely invented by them. However, the seeds fell on the fruitful soil, and for four centuries their "ideal samurai" completely overshadows the real one.

What were the real samurai like? In fact, given that all the major battles have been won by Japan as a result of betrayal (except, perhaps, the battle of Nagasino in 1575), it is difficult to say that loyalty was the main samurai virtue. At all times, the samurai moved from one camp to another, and it was not publicly condemned, but, at the contrary, even encouraged (by the fact that traitors have always been generously bestowed).

Some clans were even specially divided into two parts that supported various opponents. This way, no matter who the winner was, the money was received for the service. This somewhat contradicts the idea that the samurai served unselfishly, out of the sense of duty. Some military commanders at the time (and later, too) felt that betrayal was a common element of military strategy. For example, Akechi Mitsuhide (16th century) once said that honest people are found only among the common people, and for the samurai lie and a betrayal was a necessary part of the military art.

The idea of ​​the courage of samurai, too, is highly exaggerated. There were cases when a huge army fled as soon as the enemy approached (for example, in the battles of Fudzigava and Kurihara, 12th century). Incidentally, fantastic cowardice was exhibited by the samurai during the aforementioned war in Korea - this is evidenced not only by the Japanese but also Korean and Chinese sources. Often ill-armed force of local partisans could easily make a large Japanese division flee.

As for the preference of the death to disgrace, it should be noted that this method of problem solving was common for all Japanese at that time and was not an exclusive privilege of the samurai. This tradition appeared in Japan along with Buddhism. Among the followers of the Buddha's teaching ritual suicide was very popular (where a monk, for instance, knowingly starved himself to death or used special exercises to stop breathing). In a simplified form, it eventually spread throughout Japan - there are many cases where the suicide was committed by the residents of entire villages to protest against higher taxes. The samurai committed suicide in the most beautiful and spectacular way - by cutting their stomach in a specially arranged setting.

The fact that the samurai were connoisseurs of beauty, as well as poets, philosophers and artists is questionable. During the internecine wars period the representatives of the military class rarely lived longer than twenty-five years. By this time they were not reading and writing well, let alone engaged in literary activity (according to the documents of 15th -16th centuries, illiteracy among the samurai was unprecedented). Of course, in the seventeenth century, after the wars ended, their level of education has increased dramatically, but it was then that they ceased to be warriors.

With regard to mastery of the sword the story is not that simple. In the literature of the time of civil wars duels with swords were described very rarely, while the bow as the weapon of the samurai was mentioned frequently. Later, when the Portuguese brought arquebus to Japan, most samurai sought to buy them. The structural features of the armor of different ages suggest that their main function was to protect it from arrows, but they were very uncomfortable for fencing. So, apparently, the sword was merely an auxiliary weapon for the samurai. As for the "cult of the sword", it appeared before the samurai, because the weapon was one of the symbols of the imperial power.

As we see, the real samurai actually were similar to the knights of medieval Europe. These were the common professional soldiers with all their advantages and disadvantages. However, the myth about them is beautiful. It was able to outlive the samurai for over a hundred years.