WikiLeaks: Half of the prisoners at Guantánamo were innocent 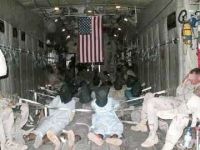 The newspapers El Pais, The New York Times and Washington Post published on their Web sites Sunday night (24) a series of secret documents that reveal detailed information about the U.S. military base in Guantanamo. The three publications deal with 759 records of 779 prisoners who passed through the prison.

Dated between 2002 and 2009, the records reveal that the U.S. government used the Guantanamo prison for illegally obtaining information from detainees, independently of whether they were suspects or not. They also inform that some of the prisoners were innocent Afghans and Pakistanis, including drivers, cooks and farmers, who were detained during intelligence operations in war zones.

El Pais cites the example of the arrested innocent prisoners Sudanese school director, Rachid Al Raheem, the Afghan, Mahngur Alijan, who was hitchhiking to buy medicine and Iranian, Bajtiar Bamari, who lived in Afghanistan at the time the U.S. was looking for Osama bin Laden. Bajtiar Bamari spent two years imprisoned at the military base without even having links to Al Qaeda or the Taleban.

"The 759 secret reports reveal the abuses at Guantanamo. The documents show that the main purpose of the prison was to extract information from prisoners, in spite of the innocence of many of them. Sixty percent were taken to the military base without being a likely threat," wrote the Spanish newspaper.

El Pais also cites the case of an 89-year old prisoner in Guantanamo. He was suffering from senile dementia, arthritis and depression. He was arrested because the soldiers found a telephone in the housing complex where he lived that contained numbers of people "suspected" to have links with the Taleban. The elderly man did not know who the telephone belonged to, neither did he know how to handle the device. Later, the authorities agreed that he knew nothing and posed no danger.

One of the prisoners was an Afghan teenager of 15 who was not only innocent, but also a victim of the "enemy." Before being detained by the U.S., Taliban gunmen kidnapped and raped the youngster.

Based on all the documents, the newspaper concluded that the presumption of innocence does not exist at Guantánamo. The prisoner must demonstrate that they are not terrorists or Taliban. There was no evidence against the Afghan, Yamatollah Abdul, for example, but he is a suspect because "When pressed to explain his story in detail he does not cooperate. He is evasive and reluctant to recognize certain things," appears in a statement.

At no time did the U.S. authorities inform that in fact the prisoners admitted their guilt, found El Pais

According to records, the U.S. military prison at Guantanamo has created "a police and criminal justice system without guarantees in which only two questions mattered: how much information would be obtained from prisoners, although they were innocent, and could they be dangerous in the future."

The strategy was to deprive the prisoner of freedom even though he had not committed any crime or war crime. So, if they knew something, if some of their family was connected to terrorism, they would reveal it to the authorities.

The documents also show that 130 of the 172 prisoners who left the base at Guantanamo were considered "high risk" - a threat to the United States and its allies. However, they were released without having been "rehabilitated or with the necessary supervision."

After disclosure of documents by the newspapers, the State Department and Pentagon deplored the leak on Sunday night in a statement.

"It is sad that many media organizations have taken the decision to publish several documents obtained illegally by WikiLeaks related to the detention center at Guantánamo," affirmed the U.S. government.

"These documents contain confidential information about past and current detainees at Guantanamo and we categorically condemn the leak of sensitive information," said the statement.

Since the establishment of the U.S. prison in 2002, seven prisoners died there, according to official data. Their maintenance does not find support in any international convention, and therefore there is no way to monitor what happens inside, the reason why the U.S. is criticized by human rights organizations. The U.S. also does not allow the UN (United Nations) to inspect the conditions of the base and the detainees' treatment.

Currently, there are 172 detainees. The maximum number of prisoners who were imprisoned on the site was 779 in 2003.