Vittorio Arrigoni, the partisan of Gaza 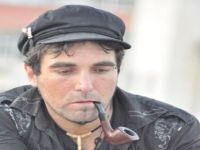 "I call you, squeeze your hand, kiss the ground beneath your feet and say: I offer my life for yours." Unadikum is heard non stop in Gaza. Sung by demonstrators in rallies, humming for many who wanted to honor Vittorio Arrigoni. The Italian activist's favorite song seems to have more sense than ever now that he is gone.

Gone are his smooth rides through the streets of Gaza City, impassive to the horns and bustle, and half smiles while smoking hookah, or the ideals tattooed on the skin and in the soul. No longer is heard his "Mushkile, Mushkile", problem, problem, pronounced in Arabic the same as the Italian.

Vittorio, Vik, Victor, was part of the Palestinian strip. There he had lived since arriving in August 2008 with some interruptions, the one imposed by the Israeli forced deportation the other by the need to take a breath after living day and night under the bombing of the military Operation Cast Lead aboard an ambulance. He was thinking in a few days' time the next break would be to visit his ailing father after the new escalation of violence delayed that exit.

He was not able go as planned because he was kidnapped on Thursday when he walked, as he did every night, to his favorite restaurant. Because some hands strangled him hours later, long before the end of the deadline set by an alleged radical Salafist group for the release of certain prisoners.

"Unadikum, unadikum" again sung between the sails of the act that ended the first day of mourning, a sad day for everyone, but especially for the Palestinians, who lost a friend and who see the possibility of life without attacks moving further away, without encirclements, without external and internal wars.

Sorrow, uncertainty, shame, summarized it all. The anger that the Gazans feel, who are hospitable to a fault, had a guest who they could not protect. All deaths are painful, but this one also makes lots of noise, summed up a fisherman. The impotence of the strip passes a hundred steps back, explained one of the young people involved in the movement for Palestinian national unity.

It consoles them, perhaps, to see that the unity of almost all political parties and civil society organizations has been achieved at the time when remembering Vittorio. Representatives of all colors came from the hospital where the body of the Italian activist was.  He had hoped to settle the procedures for repatriation through the Egyptian border in Rafah. And almost all sat at the wake, some for the photo, others because they were feeling the loss of truth.

"Unadikum" was heard there again coming from the loudspeakers, the song that sounded every time someone's cell phone called Vittorio. He sang loudly along with the farmers when he accompanied them as a human shield in the area of the wide demilitarized zone, the limits of the Strip where Israeli army gunfire is a common occurrence.

And also along with the fishermen, with whom he had sailed for months to protect them from attacks and seizures of the Israeli navy while they were fishing. In the port from which he often departed, the Palestinian traditional mourning tent was installed on Saturday, and then messages were to be collected that later would be thrown out to sea.

Vittorio arrived in Gaza by sea twice, in two ships that broke the blockade in 2008.  He was going to try to do the same in May, as a member of an international flotilla of solidarity.

That is is the reason that representatives of Hamas, who have already arrested four people, came after his death. A crime was carried out by Palestinians, but externally planned to intimidate those planning the flotilla. That is one theory more comfortable than thinking that the de facto power in Gaza is threatened from within. One more lucubration seeks links between this crime and the other that occurred a week before with the murder of director Juliano Mer Khamis in front of the Theatre of Freedom in the West Bank city of Jenin.

The truth is that Vittorio was an easy target in a difficult situation, as his four International Solidarity Movement partners in Gaza acknowledged. They walk down the street, mixed with the people. They do not want to go in armored convoys they say. And they claim it will continue, that's what they came to do.

A decision that will surely make Vittorio happy, who, as grandson of fighters against the Nazi occupation of Italy, claimed that is what led to him having resistance in his veins, unadikum.