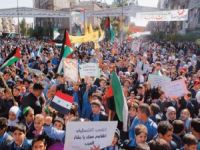 Last Monday evening (18), political leaders gathered in the Syrian Arab Club of Sao Paulo to celebrate the 65th anniversary of the independence of Syria.

During the event, the president of the Brazilian Center for Solidarity and Struggle for Peace (Cebrapaz), Socorro Gomes, criticized the interference by agents of Israel and the United States "in order to destabilize the country, attacking the government of President Bashar al-Assad and artificially creating tensions and conflicts within the borders of Syria."

Socorro Gomes also defended Syria's role in building peace between Arab peoples. "The firm position of principle and the defense of its sovereignty, of peace, a just solution to international conflicts and solidarity towards the Arab brothers (...) gives the Syrian government and people recognized respect and a connection between the peoples around the world," he emphasized.

During his speech, Socorro also warned that U.S. imperialism wants to prepare a more favorable environment for a military aggression against Syria. But, he said he was confident that the Syrian people will know to give a fair and appropriate response to "attempts at destabilization."

Beside the councilman of the PCdoB, Jamil Murad, Socorro mentioned the actions that occurred during the Lula government, such as implementing the initiative of the Summit of South American and Arab Countries, that now have continuity with the government of President Rousseff. "Syria was the first Arab country to be visited by President Lula," he recalled.

Finally, the review highlighted the opinion of Cebrapaz in relation to the conflict affecting the Syrian people. "We have an anti-imperialist position in defense of world peace and unrestricted solidarity for the attacked people. We express our solidarity to the people and government of Syria in defending their self-determination. We are convinced that imperialism is not invincible and the day of our victory approaches. Imperialism will be defeated and then we will open a new page in human history," he added.

Since March 18, Syria has been the scene of opposition demonstrations across the country that are requiring political reforms. At least 30 people were killed and 90 wounded in the last two days during the riots and armed clashes that occurred in the Syrian city of Homs, which intensified in the early hours of Tuesday (19), with the opposition group "the Revolution Syria."

The Syrian Interior Ministry statement described the incidents of recent days in Homs and in the neighboring Banias of an "armed rebellion" carried out by armed groups and organizations that want to establish an Islamic emirates, said the official news agency SANA.

According to the statement, these radical groups have murdered members of the army, police and civilians, and have attacked public and private property.