Venezuelan people are against the military interference manifested on Libyan territory

The governments of the United States, France, England, among others, participate and support the invasion 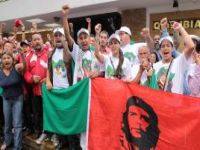 Protesters in the capital on Sunday shall go to the Libyan Embassy, ​​located at Avenida San Felipe, in the Chacao municipality, in opposition to the actions and military invasions that have occurred on Libyan territory.

The deputy, Aristobulo Isturiz, first vice president of the National Assembly (AN) and also a director of the United Socialist Party of Venezuela (PSUV), said that "the people have spontaneously surrounded the Libyan embassy to express their solidarity, against the imperialist forces that are attacking the Libyan people, to steal Libyan oil and water."

He also stressed that people must be sovereign, autonomous and must solve their own problems.

"The imperialists take advantage of any internal conflict to appropriate the wealth of nations, so we are here to advocate for peace, for an end to the aggression and to respect the autonomy and self determination of the Libyan people," said Istúriz.

Also, the NA Vice President said "we must be vigilant because the situation in Libya is not only about that territory in particiular, but also concerns the peoples of the world, because they seek to seize the wealth, to take the territory and distribute it all among the imperialist powers."

He also referred to the position taken by the right wing mass media in the country saying that "Venezuelan territory is polarized between the patriots and the stateless, this sector effectively ignores the fact, keeps silent, while the patriots protest the aggression, demanding that sovereignty and self-determination is a fundamental principle of international law."