No to foreign interference in Libya

The General Confederation of Workers of Brazil - CGTB rejects military intervention that the United States and England wish to carry out to subordinate Libya. Several political and social leaders of the world have already denounced and claimed that it is neither human rights, much less democracy, that the empire defends. What they want is oil. And that they need to destroy the independence of the countries on whose territory this wealth is.

Cynicism of the Empire 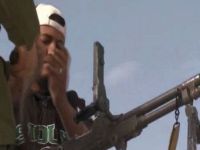 In recent days, the Obama government is saying that "all options" were on the table, while the Pentagon announced it is "repositioning" their Mediterranean fleet against Libya. Along with England's David Cameron, they are threatening a "no-fly zone" over Libyan territory, which was to be brought about by NATO.

The threat was answered by Libyan leader Muammar Gaddafi, saying that there will be "thousands of deaths" if the U.S. attempts to invade the country and steal Libyan oil. In Tripoli, speaking to dozens of leaders around the country, members of the National People's Congress and the foreign press, Kadafi reaffirmed that the acts against his regime come from "armed gangs in and out of Libya:

When Gaddafi came to power, only 9% of the population was literate. Today, the literacy rate is more than 90%. Women won many rights previously denied them, they can study and get a job.

The Arab League rejected any form of foreign military intervention in Libya, demanding respect for Libya's "national unity, sovereignty and territorial integrity." Syria's ambassador to the agency, Iussef Ahmed, in the meeting in which 22 countries were present, said that it is necessary that Arab countries confront attempts at outside interference that seek to influence this new activity of the Arab people, attempting to divert their course in order to achieve their own objectives and aspirations."

He warned that it is necessary "to break chains and reject pressures particularly in the recent demonstrations that prove that after all the Western powers and the United States only want to protect their interests, advance their agendas and the interests of their ally, Israel." Also, the Organization of the Islamic Conference, which brings together 57 countries of the Islamic faith, spoke out against any intervention in Libya.

Commander Fidel Castro, in one of his Reflections said an aggression began against Libya and that "in contrast to what happened in Egypt and Tunisia, Libya ranks first on the Human Development Index in Africa and has the highest life expectancy on the continent. Education and health receive special attention of the State. The cultural level of the population is certainly higher. Quality of life is about 100 times greater than that which existed under the rule of King Idris I."

China's permanent ambassador to the UN, Li Baodong, who assumed the rotating presidency of the Security Council for the month of March, said that "we must respect the views of Arab and African States." China stressed the need to "respect the sovereignty, independence and territorial integrity of Libya" and promoting "a peaceful solution by the people of that country and without interference." Russia, in turn, condemned the "no fly zone" as an improper interference, in addition to "a serious mistake."

The president of Nicaragua, Daniel Ortega, denounced "the terrible campaign, by the power of oil, for the enormous wealth of the Libyan people:

"In these days in which so much is spoken about bombings, Libya's army is firing cannons, tanks, artillery against the people of Libya, none of the media who want the overthrow of Qadhafi has managed to present a single picture of planes bombing people, neither tanks, neither soldiers firing machine guns."

"No to imperialist intervention in Libya. No to aggression looking for oil on the blood of innocents, that is our position," said Hugo Chavez, President of Venezuela. According to the President, peace must not be imposed on pretentious claims leading to military adventures like the invasion of Iraq in March 2003. "There is a craziness in motion and opposite to it always is the Yankee empire, which seeks to dominate the world, which is why we support peace and reaffirm our proposal for a mediation committee," he said.

Chávez reported that he discussed the initiative to form this committee with presidents and leaders of Latin American and African countries, including himself and the proper Libyan leader, Muammar Gaddafi, who approved it.

United States get out of Libya and the Maghreb!