Rebel bandits parade with flag of the monarchy 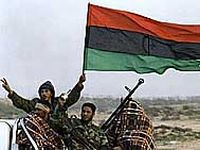 The people of Tunisia and Egypt brought down two ruthless dictatorships supported politically, economically and militarily by the imperialist U.S. and EU. They did so through massive insurrectionary movements, with a marked democratic and anti-imperialist revolutionary tendency. In Libya, the riots are being run by civil war and the threat of external aggression.

Words such as dignity, freedom, democracy, social justice, national independence, popular sovereignty, death to tyrants, came to be shouted and sung psalms and beautiful sound in Arabic. A journey that marks a revolutionary time, making history and certainly qualitatively changes the fate of millions of people.

Certainly, the words shouted by protesters and insurgents throughout North Africa and the Middle East do not have the same meaning when interpreted by the revolutionary and progressive forces, which support the emancipation of peoples, and the imperialists who seek to perpetuate the yoke.

So this time around it is best to be careful with the use of concepts and expressions. It is not only just today that U.S. imperialism entered the political arena to fight for "restructuring" and "democratization" of the region, from which will arise the "new Middle East." None other than George W. Bush turned that goal into the mantra of his two terms. Ten years ago the biggest thug of all representatives of the modern world began, by the most barbaric methods, the struggle for democratisation of the Middle East, "doing a scorched earth war" in Afghanistan.

Less than two years later, he attacked Iraq, where U.S. troops have not yet retired. They massacred the people and committed countless murders. In 2006, when Lebanon was burning under aerial bombardment by Zionist criminals financed and armed by the White House and Pentagon, the then Secretary of State for Bush, Condoleezza Rice, said a new Middle East would be born from the ashes (sic!)

At the time, the hawks in Washington could not imagine that the wave of riots would put in check in the dictatorial regimes and reactionary monarchies of their acolytes: Tunisia, Egypt, Saudi Arabia, Bahrain, Jordan, Morocco, Yemen and so on. Target states were tainted as "bandits": Iran and Syria. When referring to other regions such targets as North Korea, Asia, and Cuba and Venezuela in Latin America were added.

Bush is no longer the man in the White House, but essentially the country's militaristic policy has not changed, athough many people have deluded themselves, like Professor José Luis Fiori. In a recent article, he argues that "the project of the U.S. president could revolutionise the world geopolitics."

The United States and other imperialist powers do not change their essence, only their tactical game. They seek to adapt themselves to new situations. If the rebellion and insurrection of the masses are inevitable, if the thrones rock and crowned heads are in peril, the United States and its allies seek different forms of transition, joint military peacekeeping, new constitutions and all sorts of liberal arrangements with the objective that the situation did not escape from their control.

It is in this perspective that one must consider the events in Libya. As in other countries, Libya has also survived a brief boiling moment. But unlike all other countries that have ongoing riots, subsequent events showed that there were neither democratic demonstrations nor even a popular uprising.

The demonstrations were the last straw for the beginning of a civil war and mounting pretexts for foreign military intervention. The news of recent days replete with facts showing that much unlike a popular revolution is underway in Libya, it is a pre-ordered operation, in league with foreign interests within.

Gaddafi, former leader of an anti-colonial revolution, is being demonised. For three decades, he was with progressive and anti-imperialist forces in the world. Lately, he had spurious alliances with imperialism but was not converted, as in his time after Sadat and Mubarak, who were puppets. Not exerting any control over Gaddafi's Libya, at the slightest sign of political instability, the U.S. and European powers were moving hastily to take over the country and its energy resources.

All sorts of pretexts

Democracy in Libya is an urgent issue to solve. But it does not come by tanks and aircraft carriers from the U.S. and NATO. The democratic struggle is inseparable from national sovereignty and popular sovereignty. The armed aggression violates the principles of the UN Charter.

On behalf of the interests of big powers to monopolise the oil from Libya, all sorts of pretexts are being raised: thousands dead, a hundred and fifty thousand refugees, protection of foreign residents, and a humanitarian crisis. None of these excuses hold water. The dead and refugees result from civil war. The army was divided, a part joined the opposition. The two sides shoot, wound, kill, cause an exodus. As for foreign residents in the country, they do not register any such occurrences. Only China repatriated in a few hard working days 30,000 without incident.

Nothing can justify an armed intervention of the United States and NATO. The UN should not authorise it under penalty of being liable for more slaughter. The multilateral system, albeit precarious, has mechanisms that can be activated to help in the stabilisation of Libya. Mankind must be vigilant and united with the peoples of Libya, all of North Africa and the Middle East, the struggle for democracy and in defense of its sovereignty.

Solidarity movements and the democratic and progressive governments should not allow a repeat of the agony of a country under the heel of NATO, as it occurred over a decade ago in the former Yugoslavia.