It is precisely ten years since the destruction of the statues of Buddha at Bamiyan in Afghanistan by the Taleban regime. With plans to rebuild the two statues having been shelved, their vestiges remain as a rallying point to preserve cultural heritage...and to remember the many other instances of destruction and pillage. 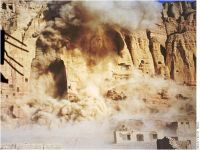 Irina Bokova, the Director-General of UNESCO (UN Educational, Scientific and Cultural Organization) considers that the vestiges of the two enormous statues of Buddha at Bamiyan can serve as a focal point for humankind to remember our common cultural heritage and to ensure that we protect it.

"The two monumental statues had stood for one and a half millennia as proud testimonies to the greatness of our shared humanity. They were destroyed in the context of the conflict devastating Afghanistan and to undermine the power of culture as a cohesive force for the Afghan people," she stated at her Headquarters in Paris.

In July 1999, issuing a decree to protect the statues, Taleban leader Mullah Mohammed Omar stated: "The government considers the Bamiyan statues as an example of a potential major source of income for Afghanistan from international visitors. The Taliban states that Bamiyan shall not be destroyed but protected."

However, as the Taleban radicalised their position against imagery and in favour of more and more strict versions of their own interpretation of Sharia law, mixed up with the imposition of Pashtun lore, while targeting the non-Pashtun or less Islamist sections of Afghan society, calls were made by religious leaders to destroy the statues because the worship of images is against Islam. This was despite the fact that in his ruling two years before, Mullah Omar had stated that there was no longer a community of Buddhists in Afghanistan who worship the statues. 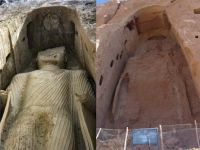 It was also despite the fact that ambassadors from the 54 states of the Organization of the Islamic Conference had declared unilaterally in favour of protecting them.

It took the Taleban weeks of determination to destroy them. After strafing the giant structures with anti-aircraft guns and artillery for several days, they were mined. When that failed to work, rockets were fired at them and then finally, they sent teams of sappers to insert explosives into the structures.

Today only the niches where the statues once stood remain. UNESCO does not consider the option to rebuild them worthwhile (they were carved into the cliff face), yet there are still Buddhist monastic sanctuaries, as well as fortified Islamic buildings, at the site which is witness to 13 centuries of Buddhist art showing various eastern and western cultural influences.

However, this was not the only outrage against our collective cultural heritage. Irina Bokova explains, "Since then we have witnessed other instances where cultural heritage has fallen prey to conflict, political turmoil and misappropriation".

The main issues at stake are the need to raise awareness and fight against attacks on cultural properties through looting, smuggling and illicit trade and more importantly, the promotion of tolerance and cultural rapprochement. This will be the central theme of the Forum at UNESCO's HQ in Paris on March 2, which will be followed by the Bamiyan Expert Working Group on March 3 and 4. 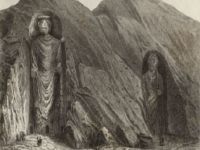 At this last meeting the future of the niches remaining at Bamiyan and the way forward for this site will be discussed among representatives from Afghanistan, international experts, donors and other stakeholders.