The launching of the World Social Forum in January 2001 was caught up in the reaction of the USA to the terrorist attacks later in the year. Ten years on, as Africa organizes the event for the second time, the WSF has a new chance to re-launch the political processes underlying the mass of social groups today. 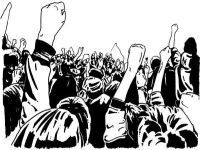 In his column in Patria Latina*, Emir Sader claims that shortly after the World Social Forum was launched at the beginning of 2001, it was caught up in the reaction by the USA to the terrorist attacks of September and adds that "a movement which wanted to focus its action on social movements, aside from the political forces and everything connected to these...to 'change the world without taking power'...found itself in difficulties as regards assimilating the renewed role of the States, imperialism and war, all of these areas connected to political activity".

So the movement which aimed to be purely and merely social, found itself confronted, immediately after it was launched, precisely by the political movements it had intended to avoid. However, Sader claims, "the movement managed to react participating in the greatest demonstrations hitherto seen, against the war in Iraq". Yet instead of capitalizing on this, "it followed its own path as if nothing had happened" as it went on its way.

At the same time, in Latin America, governments whose stance was clearly against neoliberalism were being elected. These Southern countries were reacting with healthy economic and financial measures and successful stimulus packages, fostering development, intensifying social policies, increasing employment and buying power when the North was floundering in economic and financial meltdown. What capital was made of this?

Emir Sader claims that now, with the second WSF organized in Africa, there comes a real chance for the Social Forum "to articulate with the political processes which exist in fact, today when there is a crisis in the political regimes of the Middle East". The author asks, how many representatives from these countries will be present at the WSF?

For Emir Sader, the presence of the opposition forces in the countries where these Middle Eastern dictatorial regimes have stood unhindered for decades should have been invited. At the World Social Forum, not only would they hear first-hand the experiences of those who led the Latin American social movements - Lula, Chavez, Morales and others - but also, they would have the opportunity to compare the ways in which the Latin American countries reacted to the global financial crisis, and the repressive measures adopted by the "developed" economies, which caused more poverty, more unemployment and more social chaos.

"This is a new opportunity for the WSF not to be living in vain, supported by premises surpassed during the decade we have just come through, in which we passed from resistance to the construction of alternatives, so that we can re-establish in another way the social causes with a political sphere; we are showing ourselves capable of overcoming neoliberalism - the central aim of the WSF, when it speaks about the building of another world, and claims 'another world is possible' ".