How is it possible that the richest 1% grab 99% of the wealth in this brutal class war? 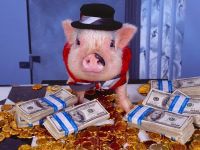 Who are they? The richest 1%. And perhaps the next 9%. Who are we? All the rest. Which raises an interesting question. How has a small fraction of the population that is diverse in many ways, for their narrow economic interests, managed to dominate the economic interests of the majority? And in doing so, threaten the economic welfare of our nation and lead the global financial system to collapse. They have money. We have votes.

In theory, this means that we should have government. In theory, the government should be a counterweight to the excesses of money, take a broad view for the good of the nation and ensure the majority. Needless to say, the poor and the mistreated.

What we have at present is a political party that is undoubtedly the party of money and another party completely sold to money.

Well, at least we have safety nets.

The biggest regret of George Bush is not to have privatized social security. Why so much longing?

One reason is that this is a great mass of money. Absolutely huge. The bankers and money changers are driven crazy by not being able to get their hands on it.

The other reason is ideological aversion. Stephen Moore (a senior fellow at the Cato Institute, a columnist for the National Review and president of the Free Enterprise Fund) wrote: "Social Security is the soft underbelly of the welfare state. If you can puncture it, you can undermine the whole welfare state."

Where Bush failed, Obama has just taken the first step.

The "crash" has put the states in danger. Instead of raising taxes or borrowing, some have decided to make cuts in Medicaid, the program that provides services to different categories of people with low incomes: pregnant women, young people under 19, blind, disabled or who are in need of home care. If you're a poor boy who needs a liver transplant, you can start to ask, shoplift one or die. 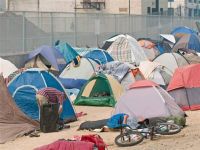 This movement to the right is a triumph of a long and well funded propaganda campaign.

Every time I read an editorial in the New York Times written by a "senior fellow" of the Hoover Institute or a member of the Cato Institute, it makes me want to scream, please change this into "prostitute paid by a psychotic millionaire extreme right-wing." That is much closer to reality.

In turn, they have a great influence on the mainstream media. "When the Conservatives denounced the leftist tendency of the mass media, they saw their institutions were quoted in various media almost 8,000 times in 1995, while liberal or progressive think tanks received only 1,152 citations ("As philanthropic institutions and Conservative think tanks become U.S. policy" by Sally Covington, Covert Action Quarterly, Winter 1998).

Its influence in the national mass media affects the entire national dialogue. Now, obviously, they have taken the concept of the think tank to a whole new level: Fox News.

What happens with the mass media? Do objective journalists - out of Fox News - exist?

In journalism, objective reality does not exist. Only objective comparisons exist. Assignments can only come from "valid" sources. A journalist cannot take the tax cuts and compare them with the economic results, employment growth, changes in the average salary and the like, and say that tax cuts do not create jobs. All they can do is mention politicians like Bush and Obama, who say that tax cuts are a stimulus and then find someone with the same authority or, at least, with significant authority to the contrary, then treat it like a Chinese menu: two statements in column A, one from column B. But what happens if there are no heavyweights ready to contribute to column B?

Here is the really strange thing.

The whole field of economics does not know where it is going.

After the crash, they were unable to speak out against the tax cuts that caused it. They were unable to find a way to solve problems. Solutions, based on historical experience, it seems quite obvious, are to raise taxes and spend money on useful things that private industry will not or cannot do, and employ people.

Paul Krugman's theory, to paraphrase it roughly, is that economists suffer from envy, which is like penis envy, but even more stupid. Economics is a social science that is not accurate. Social scientists look at the physics, the hardest of the hard sciences. They see a bunch of math and formulas. They imagine that if they use a lot of mathematics they will be strong. To create mathematical models from the messy complexity of human activity assumes perfect markets. If the economy is stable, it can work.

Faith in the perfection of the markets promotes deregulation and tax cuts. This destabilises the economy. Therefore, economists contribute to disasters that do not exist in their mathematical models.

Charles Ferguson, who directed the great documentary Inside Job, is much more cynical. He believes that academic economists, as the doctors who favor the drug companies, cash in on promoting the interests of big capital. In the film, it does a wonderful job to prove precisely this.

Certainly, the entire academic world, with the exception of some departments of English literature, has become part of the corporate managerial, banking, military and political connection.

It was assumed that the ivory tower was above this disgusting world. It was one of our last defenses in the class war, a place dedicated to knowledge itself and truthful precisely because it is authentic.

At present, universities currently seek truths that someone is willing to finance.

Tomorrow's truth is that which has been paid for today.