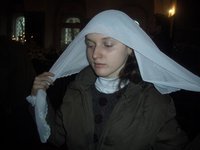 Religious women in strict clothes would be laughed at and used as a subject for countless jokes during the beginning of the 1990s. Their secular friends and colleagues did not even want to believe that young women wearing long skirts and handkerchiefs could arrange their private lives successfully. However, as experience shows, girls in handkerchiefs enjoy special demand.

The TV series and two motion pictures Sex and the City has earned global popularity for one simple reason. The lives of its main characters are very similar to the fates of millions of lonely woman all over the world. They are successful, attractive and stylish, but single. How can one explain the paradox?

It seems that those women, who do not use cosmetics, wear plain clothes, cover their heads with kerchiefs and follow religious rules, are no competition to fashionable and liberated women when it comes to love affairs. Real life proves the opposite, though. Religious women get married one after another and celebrate the joy of motherhood. The prototypes of Sex and the City women keep meeting each other in restaurants and cafes to sip cocktails and complain to each other of their failures in relationships with men.

If you ask a big city woman why she broke up with her boyfriend, the answer will in most cases be typical: he is not tidy, he scatters his socks all over the place and he is very inaccurate when he eats. As a rule, they expect too much from their men (the level of income, the social status, the intellectual development) or they want to have romantic relationships (exciting and memorable dates, poems written in their honor and other surprises that testify to high feelings).

"Modern women do not want to get married, they do not want to have children, - Ivan, a 30-year-old man said. - I broke up with my first common law wife because she only liked to have fun, she was not interested in having a family. I met my wife in a group of volunteers, who helped orphans. There were people of different beliefs among the volunteers, but the group was organized by Orthodox believers. My wife turned out to be a religious person, she shares a patriarchal point of view about family and she dreams to have children," the man said.

Men become attracted to religious women because they create personality cult in their families. An emancipated woman perceives her husband just as a partner, whom she can compete with. A religious woman sees her husband as the head of her family. A man is a ruler in traditional families.

"She serves him dinner and she bows to him, she is completely crazy," other woman often say about religious females.