Save an animal this New Year

IFAW (International Fund for Animal Welfare) is a non-profit-making organization which sends professionals to help animal welfare around the world, entering disaster areas, saving livestock and working to stamp out cruelty. From saving dogs in Bali, cattle in Pakistan, IFAW worked around the globe, fighting seal clubbing, whaling and raising awareness into animal suffering. 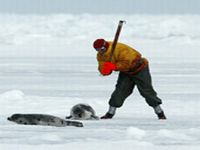 Fred O'Regan, IFAW President, declares that "2010 was truly an amazing year for animals. I'm so proud of what you were able to help us accomplish". Summing up the year, he stated: "Together we cared for tens-of-thousands of cats, dogs, and farm animals after devastating earthquakes and floods... we helped save over 250,000 seals and moved even closer to an end to Canada's commercial seal hunt...against steep odds, we helped defeat a deadly proposal to legalize whaling...and we protected and cared for countless animals, big and small, all around the world".

And around the world it was. In the Year of the Tiger, IFAW's resources saved tigers living in bankrupt shelters and took them to safe havens in the USA, the EU seal trading ban took effect this year, after years of campaigning by IFAW and other organisms, 23,000 head of livestock were saved in Pakistan following the worst floods in the country's (or even the world's) recent history, in Haiti, 45, 350 animals were helped after January's devastating earthquake, IFAW offered consultancy to the Icelandic Veterinary Authority after the volcano Eijafjallajokull erupted and finally,  IFAQ helped to defeat a measure to legalise whaling.

This new year, a donor promises to match dollar-for-dollar donations made up to 25,000 USD, so donors to the Organization will be making a double contribution.