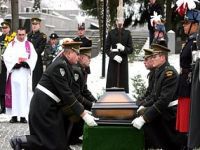 Group succumbed to hunger and extreme cold in Lithuania

The remains of 18 soldiers of the Grand Army of Napoleon Bonaparte were buried again in Lithuania on Monday. Nearly 200 years after the failure of the siege of Moscow, the men were obliged to flee to the west in the midst of extreme cold. The remains were found last year outside the Lithuanian capital, Vilnius. Experts are of a view that the soldiers were members of the infantry, hussar and dragoon units.

A small group of representatives, diplomats, French military and Lithuanians attended the burial of the remains in a cemetery in the Lithuanian capital. A mass re-burial of 3,500 Napoleon's soldiers was held in 2003, but the remains of these soldiers were found elsewhere.

"These men were soldiers of Napoleon's army who participated in the Russian campaign and were returning to Moscow. They died of hunger and cold here in Lithuania," Michael Bourlet told Reuters, a military historian of the French military school of St. Cyr. 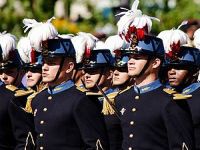 On June 24, 1812, ignoring the advice of his closest advisors, Napoleon invaded Russia. Never in living memory had so large an army been assembled, more than 600,000 men from every corner of his empire. Napoleon prophesied the war would be over in twenty days. Beware of false prophets!

When Napoleon's attempt to defeat Czarist Russia collapsed in the winter of 1812, the soldiers of his army retreated, covering 1,100 kilometers under freezing temperatures.

"Between 20,000 and 30,000 soldiers died in the Vilnius region in early December 1812. It's hard to make a more accurate estimate, because the Army was so disorganized," Bourlet said. The men were dropping off all along the path of retreat.

The French emperor, who would suffer his final defeat at Waterloo only three years later, left for Vilnius on December 5, leaving his soldiers just days before the arrival of Russian forces.