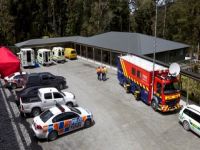 According to the superintendent, the second explosion left no survivors

All 29 mine workers trapped in the Pike River mine in New Zealand for the last 19 days are dead, according to local authorities. According to the leader of the rescue teams, Gary Knowles, a second explosion of methane gas in the mine, which occurred around 14:30 on Wednesday (local time), left no survivors. "I was near the entrance of the mine and the noise was impressive," he said. Knowles also said that the priority of the teams shall be the recovery of 29 bodies.

After hearing the news, dozens of families left the press room overwrought and some family members tried to attack the police, angered by the fact the rescuers did not enter the mine immediately. Experts said the high level of toxic gases made any attempt at an immediate rescue a risky operation. During the morning, an analysis revealed an air concentration of carbon monoxide and methane, in addition to insufficient oxygen.

Authorities arrived with cameras to send probes into the mine, but no sign of life was found from the first explosion last Friday. The trapped miners are aged between 17 and 62, 24 are New Zealanders, two are Australian, two are British and one is South African.