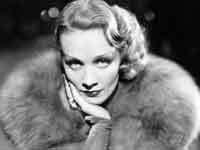 Looks were a sore subject for Greta Garbo. To remain forever young and beautiful, the actress left the cinema in the zenith of her fame, and locked herself down within four walls until her death, refusing to see people. What were the hostages of eternal youth capable of doing? Forgery of the date of birth in a birth certificate is only an innocent move, which was used by many legendary beauties.

It was very difficult to be the standard of beauty in the last century. "Grandma tricks" failed to keep pace with the rapidly changing world, and plastic surgery was still not up to par. Once the daughter of Marlene Dietrich joked: "My mother was so involved in downplaying her age that it appears that I am older than her».

Actress Romy Schneider did not measure her age in years. "My age is 54 movies," she said in 1979, when she was 41 years old. Gala Dali, the Russian wife of the legendary artist, was desperately struggling with old age. Large doses of vitamins, new cosmetics, a string of young lovers, experimental plastic surgery - she spared no means. She was, incidentally, the first Russian who agreed to go under the surgeon's scalpel. She did it so many times that at the end of life the skin on her face would often burst and not heal. Until her death at the age of approximately 90 (the real age is not known), she wore a dress from the most expensive designer, considering it was a way to cheat aging.

How did the legendary beauties of other eras hide the age?

Beauty rituals loved by Cleopatra are described in ancient scrolls with great detail. She (well, of course, she and her servant) would mix honey with aloe gruel and add water infused with silver. The result was miraculous lotion for facial rejuvenation. And after the famous milk bath the queen enjoyed this scrub: 300 grams of sea salt and a half a cup of heavy cream.

Napoleon's wife Josephine, who was a simple woman, believed in rejuvenating properties of the mask made of boiled potatoes. She cleaned her clogged pores with hot compresses with camphor. Every morning the first thing she drank was a glass of lemonade - at the time it was a simple lemon juice diluted with fresh water. This morning procedure is popular with today's nutritionists as the best way to keep intestines clean.

Marquise de Pompadour, a mistress of Louis VI, was, according to her contemporaries, of poor health, and her skin was thin and dry. She treated it with a mask of cream mixed with whipped egg whites and lemon juice. Her mornings began with her favorite skin-whitening procedure (lemon juice) and a 15-minute massage with olive oil. Her favorite drink was carrot juice with a spoonful of honey. And, it seems that these recipes worked. In any case, the age of any of these ladies was not known by their contemporaries.

Today the most beautiful women in the world have at the disposal plastic surgery, services of stylists, cosmetologists, and dieticians, but some women prefer to change their age-defining documents, slightly correcting the date of birth. The age of the spouse of Antonio Banderas Melanie Griffiths is known, perhaps, only to her own mother. They say that her husband Antonio Banderas has not seen her passport even on the wedding day. However, despite the fact that the paparazzi called Melanie "Frankenstein in a skirt" for her addiction to plastic surgery, ironically, it was she who became the face of the advertising campaign of a famous cosmetic brand under the slogan: "Do not hide your age, challenge it!"

Still quite young Paris Hilton's deducted three years from her age, correcting her date of birth in the documents. According to her passport, Paris was born on February 17, 1981. The records in the driver's license and health insurance says that she was born in 1978. Copies of these documents are on display online. It turns out the famous diva is over 30.