Chinese dragon breathes fire at Louvre and the British Museum 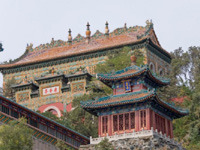 The Chinese administration urged Western leaders, museums and private collectors to return the treasures of the Old Summer Palace in Beijing. It mostly goes about the events of the Second Opium War of 1858-1860 and about the suppression of the Boxer Rebellion at the end of the 19th and in the beginning of the 20th centuries, when British and French troops plundered the Chinese capital, including the emperor's residence.

Many of the stolen items are currently preserved in world's most renowned museums. Chinese officials said that the invaders had stolen as many as 500,000 culturally valuable items.

A similar problem exists between Great Britain and Greece. In 2004, on the threshold of the Olympic Games in Athens, then prime minister Costas Simitis urged his British counterpart Tony Blair to return the treasures of the Parthenon, a temple in the Athenian Acropolis. The treasures were delivered from Greece in 1817 to the British Museum, where they still remain. Last year, Greek President Karolos Papoulias repeated the requirement to return the treasures, but the British do not seem to be willing to listen.

Unlike Greece, Beijing is not going to keep silence. The Chinese administration is strongly determined to retrieve the cultural treasures.

Nikolay Makarov, the director of the Institute of Archeology of the Russian Academy of Sciences: "For many years, especially during the era of colonization, there were no laws which would restrain world powers from plundering archeological findings. The international laws have changed since then, and now countries may claim the return of their treasures. By the way, there is practically no French item among the exhibits of the Louvre Museum in Paris. The same can be said about the British Museum."

Sergey Fyodorov, a senior scientist with the Institute of Europe of the Russian Academy of Sciences, believes that China will most likely not be able to win the fight for the stolen works of art. There are no legal mechanisms for returning the items, which French and British soldiers had obtained as their trophies.

"In addition to the moral and the material aspect, the story has a political side too. The political factor apparently dominates all others. China wants to become a world superpower in every sense of the word, including the political one. China tries to interact with the West on equal terms. It seeks revenge for humiliations of the past, including the defeat that it suffered during the opium wars. Those events have always been a symbol of national humiliation for China," the scientist said.

China has probably been inspired by Egypt, which succeeded in its claims to Britain to return 25,000 artifacts, including the Rosetta Stone (a fragment of an Ancient Egyptian granodiorite stele, the engraved text of which provided the key to the modern understanding of Egyptian hieroglyphs). The returned artifacts are dated from the Stone Age to the VII Millennium BC. The English stole the rarities during the campaign against Napoleon in Egypt.

Egypt has been very persistent in the endeavor to return the stolen works of art. The efforts taken by the country during the recent years have resulted in the retrieval of over 30,000 culturally valuable pieces from Britain, Germany and France.

Egypt's cultural success has sent a message to those who want to settle scores with the raiders of ancient treasures. An international conference was organized in April of this year to unite the countries that had suffered from Western looters. China is not alone in the struggle. Egypt, Iraq, Greece and India are in the club too.