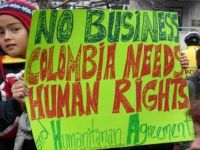 "This is not a trivial threat. Two days before, we were receiving threats as there was an offense in Cartagena, an attempt against one of the leaders of "AFRODES," Gimenez Sanchez, one of the associate directors of the Washington-based NGO.

AFRODES, in fact, will be recognized next week with the Human Rights Award for 2010 that Wola delivers.

The threats came via an email on the 10th of October. "Consider yourself a dead person. The time has come to eliminate you all," says the email in one of its paragraphs.

Following previous threats, dated May and June, Jair Murillo, an activist and leader of this organization of displaced African descendants, was killed

According to Wola, this Monday they will meet with U.S. government personnel asking for their strong condemnation. Likewise they will also ask the government of Juan Manuel Santos to publicly denounce the threats and ask the authorities to investigate and punish those responsible.

Another Colombia is possible!!